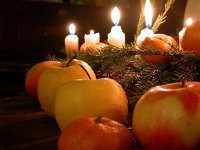 December 21 is the shortest day of the year with the longest night following. The winter solstice coincides with the start of the great Celtic winter festival - Yule. The holiday was traditionally celebrated for 13 nights. In ancient times, people used to believe that this is the time when spirits and gods descend to the ground to communicate with ordinary mortals.

Researchers say that the word 'Yule' originates from the Scandinavian 'iul' and 'hjol', or the Celtic 'hweol' which means 'wheel' - a hint to the natural cycle of changing seasons. Others link the holiday with one of the names of Jolmir, a Scandinavian god. There is also a theory saying that the word comes from the name of Roman Emperor Julius Caesar.

Ancient Anglo-Saxons started celebrating Yule on December 19 or 20. The holiday was preserved during the Christian era, although Christians started to celebrate it on January 6-9, during the middle of the northern winter. Thus, Yule practically coincided with Christmas, which is probably the reason why the tradition to celebrate this holiday was nearly lost in time.

In ancient times, 13 nights counted from the longest night in the year, were called "nights of spirits." The nights used to be dedicated to female deities, who were "responsible" for obstetric aid and fate. Medieval Germans believed that it was the time, when life-giving divinity was born - the Sun. Peasants would light fires on snow-covered fields, drink apple wine and bless trees and future harvests.

It was believed that one was not supposed to stay alone at night of winter solstice over the fear of encountering trolls and elves - the spirits of the dead and creatures from the nether world.

Children would go from one house to another carrying baskets made of branches of evergreen trees and wheat stems sprinkled with flour. There were apples and carnations in the baskets. Apples symbolized the sun, branches - immortality, wheat stems - harvest, whereas flour was a symbol of light and life.

People would decorate their homes with winterberry, mistletoe and ivy to invite spirits of nature to join humans to celebrate. They would keep a branch of winterberry near the doorstep throughout the whole year afterwards not to lose the goodwill of spirits.

Celebrating Yule, people would sing carols, decorate the Yule tree (usually it was a mistletoe), exchange gifts and kisses, light candles and drink hot ale. There was a tradition to swear oaths on the head of a wild boar. It was thought that it was a way to reach Freyr, the god of fertility, whose holy animal was the boar. The custom later led to the appearance of the tradition to slaughter and cook a pig for Christmas dinner.

A Yule log is one of the symbols of the winter festival. The tree for the log was supposed to be found during 12 hours before the beginning of Yule. It was strongly forbidden to buy the log. Traditionally, people used ash three for the log - the holy tree of the Teutons.

The log would be placed in the hearth, decorated with herbs, sprinkled with flour and then set on fire with the help of a piece of the log preserved from the previous year. The log was supposed to burn the whole night and then smoulder in the hearth for 12 days afterwards.

The end of the winter festival was celebrated on the 13th night - on January 6 in the Christian Era. The day after the end of the celebrations was considered the day of the fate. Everything that a person would say and do that day before sunset was thought to predetermine the events which would happen next year.

Many Yule traditions have been preserved nowadays as Christmas traditions. For example, in European countries, people decorate evergreen trees before Christmas, drink hot mulled wine or ale with fruit and spices. A Yule log became a Christmas log in England. They now "burn" the log placing three burning candles on it.

If we take a closer look at Christmas and New Year holidays, we will see that these two holidays are only a variation of the pagan holiday which was held in honor of the gods of the sun, fertility and other natural spirits.