Fidel Castro: The empire in the dock 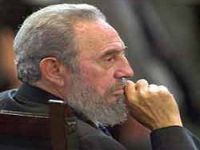 Julian Assange, a man who several months ago very few people in the world knew, is demonstrating that the most powerful empire that ever existed in history could be challenged. The bold challenge was not from a rival superpower, a country with more than one hundred nuclear weapons, a country with hundreds of millions of inhabitants, a group of nations with vast natural resources, which the United States could not do without, or of a revolutionary doctrine able to shake the foundations of the empire which is based on plundering and exploitation of the world.

It was just a person you hardly hear mentioned in the press. Although it is already known, little is known of him except the much publicized imputation of having committed loving relationships with two ladies with the proper precaution in times of HIV. A book is not yet written about his origins, his education or his philosophical ideas and policies.

The motivations that led to the crushing blow to the empire are not even known. It is only known that morally it was put on its knees.

The news agency AFP reported today that "the creator of WikiLeaks will remain in prison despite getting bail (...) but should remain between bars until they resolve the appeal by Sweden, which calls for his extradition for alleged sexual crimes."

"... The lawyer representing the Swedish state, [...] announced their intention to appeal the decision to release him."

"... Judge Riddle set as conditions for the payment of a fine of $380,000, the use of an electronic bracelet and enforcement of a curfew."

The order itself stated that in case of being released "... should reside on a property of Vaughan Smith, his friend and chairman of the Frontline Club, the club where WikiLeaks established its headquarters for journalists from London three weeks ago ..."

Assange said: "'My convictions do not falter. I remain faithful to the ideals that I have expressed. If this process did something, it was to increase my determination that these are true and correct ... "

The brave and brilliant American filmmaker Michael Moore said he offered WikiLeaks its website, its servers, domain name and everything that they can provide"... "he declared WikiLeaks stays alive and thriving while continuing to work to expose crimes that were hatched in secret and committed in our name and intended to be done with our tax dollars ... "

Assange, affirmed Moore, "is suffering" an attack so heartless [...] because the information shamed those who concealed the truth."

"... Regardless if Assange is found guilty or innocent [...] he is entitled to pay his bail and defend himself." [...] therefore, I and filmmakers Ken Loach and John Pilger and writer Jemima Jan offered money for bail."

The barrage of the U.S. government against WikiLeaks was so brutish that, according to surveys from ABC News / Washington Post, two of every three Americans want to take Assange to U.S. courts for having published the documents. No one dared, however, to challenge the truths they contain.

The details of the plan drawn up by strategists of WikiLeaks are not known. It is known that Assange distributed a substantial volume of communications from five major transnationals of information, which currently have a monopoly on many news broadcasts, some of them are extremely mercenary and pro-fascist, such as the Spanish Prisa and Der Spiegel, who are using them to attack the most revolutionary countries.

World public opinion will follow closely all that happens with WikiLeaks.

On the right-wing Swedish government and the warmongering mob of NATO, which both like to claim to rely on freedom of the press and human rights, will fall the responsibility of which it is possible that we may or may not know the truth about the cynical politics of the United States and its allies.

Ideas can be more powerful than nuclear weapons.