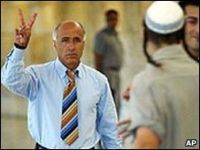 The International League for Human Rights, one of the organizations in this area with the greatest tradition, held its annual award ceremony in Berlin with half a century of tradition, awarded this year to the Israeli peace dissident Mordechai Vanunu. Like the Chinese dissident and Nobel Peace Prize, Liu Xiaobo, Vanunu has not been able to collect the prize in Berlin, which bears the name of Carl von Ossietzky, German pacifist and journalist of the thirties.

Von Ossietzky was convicted of "treason" for release in 1931, in the journal Die Weltbühne, the secret of German national rearmament. In 1936 he was awarded the Nobel Peace Prize, but the Nazis did not allow Ossietzky to go and receive it. Instead, he was interned in a concentration camp and died two years later of tuberculosis.

Mordechai Vanunu was also sentenced in 1986 to 18 years in prison for "treason" and "spying." His crime was to disclose the secret of Israel's possession of nuclear weapons. Released in 2004, he is still banned from contacting the press and cannot move freely. At the Berlin gathering, the name of Julian Assange, and another popularizer of disclosing secrets was very present, the Irish Mairead Corrigan-Maguire, Nobel Peace Prize 1976, calling the enforced absence of Vanunu "shameful."

Corrigan-Maguire and five other Nobel laureates, including the German Günter Grass, called for Vanunu to be allowed to go to Berlin, without obtaining even an answer. In his absence, some pacifist Israeli Vanunu partners were informed at once and participated in the event, including the journalist, Gideon Spiro, founder of the support committee for Vanunu.

(ed. note: the Empire and its sycophants only cry about "worthy" causes, who often are subverting whatever happens to be the Empire's current target)

Spiro, 75, was born in Berlin in 1935 in the bosom of a German Jewish family. His father, Shmuel, was a prominent Berlin physician and his mother a photographer, "so if it were not for the Nazis, maybe I would have continued to live in this city, and might even have been delegated and up to a Federal Chancellor," he jokes. Instead, the family emigrated to Palestine and participated in the founding of Israel. Gideon Spiro graduated in a kibbutz, and served the country as a paratrooper. Much later he founded the peace movement "Yesh Gvul," and in 1986 the "Committee for Mordechai Vanunu and for a nuclear, chemical and biological weapons free Middle East." Today he lives in Tel Aviv, but still speaks fluent German.

How did you meet Mordechai Vanunu?

It was when the Mossad kidnapped him in Rome, they took him to Israel and put him in prison in 1986. As soon as I found out, I became partial to him, because I was active before in the anti-nuclear field.

What kind of work did Vanunu do in Israel's Dimona nuclear center?

He worked as a technician in the reactor, which is the origin of the production of nuclear weapons of Israel. He had good knowledge of what was done there. In nine years of work, he had time to see what was done and what they had stored there. As soon as he realized that it was part of the military nuclear machine, it was going against his conscience. He decided to reveal what he knew to the Sunday Times of London.

That Israel had nuclear weapons was already an open secret in 1986, to what extent was it a revelation?

Everybody knew it, assumed it. All international institutions concerned with the problem, research centers etc. They were departing from the fact that Israel was a nuclear power, but nobody had proof. Vanunu provided the "smoking gun," and broke the ambiguity. What Israel was saying was that Dimona only had conditions to prepare weapons if necessary, but it was not true. Vanunu said he had seen the weapons with his own eyes and he took pictures of them.

... Of these, eleven years in solitary confinement.

What does that mean?

Something that Amnesty International describes as "inhumane." The purpose was to drive him crazy and to place him for life in a mental asylum. They were about to achieve it because there was a time when Vanunu began to lose his sense of reality. One of the greatest achievements of our committee, indeed the only, was stopping the solitary confinement. It was quite an international campaign. Mordechai is a very interesting personality. Very tenacious. Unwavering. The authorities cannot forgive him after 18 years in prison, he comes out of prison with the same idea with which he entered: the abolition of nuclear weapons. His position did not move an inch. That drives them crazy, and they continue harassing and abusing him.

Vanunu is a Christian today.

Born in a very Jewish family. His father was a rabbi. He converted to Christianity in Australia when he left Israel with all the secrets in his suitcase. There he met an Anglican community. He was attracted because it was very international and open, the opposite of the situation in Israel, where there is no separation between religion and state. Membership in the Anglican Church was more of a protest, because this church is liberal and open to all races and nationalities, it is the opposite of Israeli state chauvinism and religious discrimination against non-Jews. Vanunu is essentially a lay person. Israel will not forgive that either. A Jew who converted to Christianity and also has the Dimona history becomes the most hated person. He is independent, has not allowed them to brainwash him, and that is provocative ...

What does Moroccan origin mean in Israel today?

Moroccan Jews are discriminated against by the European Israeli establishment. On the periphery of the country and society, usually with the worst jobs, with few studies...this is a serious crime there. The source of the problem is that in Israel there's not the slightest regard for anything coming from the Arab world. Vanunu did what was for them a double surprise in that context. We had a colonel who spied for the Soviet Union, was sentenced to 15 years in a military tribunal and after eight released him. He was a European Jew. Vanunu, in contrast, was despised as the Eastern establishment. "How dare this Jewish Moroccan ...?". That's the mentality. And he had to serve his entire sentence.

Do they accuse you of anti-Semitism in Israel?

It is the atomic bomb of propaganda. For example, if someone from Spain condemns the Israeli system of Apartheid, the answer is that you continue in the Spanish tradition that once expelled the Jews. If you are really an anti-Semite, then nevermind, but if you are a humanist, an advocate of human rights and peace, they force you to explain, to defend yourself, you put on the defensive.

It is an effective weapon, especially in Germany, which gives submarines capable of carrying nuclear missiles to Israel, a madness that contributes to the next holocaust, a shame to the previous one, an utter stupidity for Israel. But that weapon is losing power, because both the generation that was a victim as well as those who promoted the slaughter of Jews in Europe, is disappearing. In twenty years, this resource will disappear. German policy does not support Israel, but its militarism.

It's madness: they are contributing to the next nuclear holocaust, arming with the technology of mass destruction the region most stirred up in the world. And the things about the submarines was started by Joschka Fischer, of the pacifist political Green Party ... We must prevent Iran from the bomb, but if we just focus on Iran and allow Israel to have them, then any other Arab country will want to have them. We favor a nuclear-free Middle East because it is a matter of survival for all, including Israelis.

In Israeli society you are very marginal ...

Regarding the nuclear issue, we are very marginal and we rely heavily on international support. Even in the peace camp there are many who prefer not to touch the nuclear issue, because there is the idea that the bomb is a guarantee for the existence of the state, but it is not a guarantee, but a threat. For Israel and for everyone else.