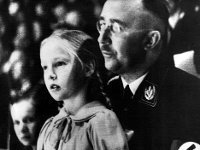 The death of a former SS guard and issuing an arrest warrant for another one drew attention to, perhaps, the most unusual support group in the world. The organization is called Stille Hilfe, or "Silent Aid" and helps former punitive flee from justice. The group is headed by none other than Heinrich Himmler's daughter, 81-year-old Gudrun Burwitz.

According to various estimates, from 25 to 40 people are involved with Silent Aid. The organization truly lives up to its name and works silently, without attracting undue attention. Now, for example, the "supporters" are trying to avoid extradition to The Hague of 88-year Klaas Carel Faber, who the Netherlands authorities wanted to sentence to life imprisonment for involvement in the murder of 22 Jews and resistance fighters during the war.

Among the beneficiaries of Silent Aid was 89-year-old Samuel Koontz who passed away two weeks ago. The scale of his atrocities is far vaster: Kunz was accused of the involvement in the elimination of 433 thousand Jews in a Nazi concentration camp Belzec in occupied Poland.

The other day the members of the organization held another secret meeting in Munich, where the "supporters" have speculated on a strategy to assist the survived war criminals. Silent Aid is a completely legal organization that prefers not to get into a spotlight as it is not customary in Germany to publicly praise their "black sheep in the family" - Adolf Hitler or Nazism. However, the members of the organization are free to continue the work of their idol, and look for refuge for the few survived punishers.

The group has hundreds of anonymous supporters and not only in Germany, most of them are young neo-Nazis. They practically worship Gudrun Burwitz. This woman has devoted her entire life to the memory of her father. Himmler loved his daughter more than anyone in the world and called her his "little doll." The feeling was mutual, and Gudrun adored her father.

Perhaps the "little doll" was unaware of her father's doings? This is quite possible. In one of the photographs little Gudrun stands next to her father against the backdrop of the Dachau concentration camp. A cute family photo, if we do not consider the fact that only a few meters away from them prisoners are tortured, killed and burned in the camp crematorium. During 12 years at Dachau approximately 40,000 people had been killed. Now Gudrun is certainly aware of her father's activities, and, most surprisingly, she continues to worship him.

Frau Burwitz resides in a suburb of Munich. No telephone directory has her number, and her house is registered in the name of a construction company. Gurdrun does not let anyone into her secret world, especially journalists. Why would she when she has work she loves, and worship of the followers of Nazi ideas. The fact that the blood of Himmler flows in her veins makes her nearly a goddess for the members of Silent Aid.

The most successful operation conducted by Gudrun was to ensure a comfortable existence for Anton Mallot, a guard of a camp in Czechoslovakia, whom the Czech court sentenced to death in absentia. Using the funds of Silent Aid, Gudrun rented for Mallot furnished rooms in a nursing home built on the land formerly owned by Hitler's deputy Rudolf Hess, and visited him twice a month until his death from cancer in 2002.

Gudrun took care of Martin Sandberg, who headed an elite squad that murdered hundreds of thousands of Jews, communists and Gypsies in the Baltic countries - Latvia, Lithuania and Estonia. He spent his last days in comfort in a nursing home in Stuttgart.

Several years ago, Gudrun visited a neo-Nazi rally in Ulrichsberg in the north of Austria. It was one of the few cases when she participated in a public event. There the 81-year-old "little doll" once again confirmed her "divine" status when all former senior officers lined up in front of her, as she walked down the line pleasantly asking them where they served. Andrea Röpke, a recognized authority among the Nazis, later said that the congregation experienced awe before Gudrun who displayed a remarkable knowledge of military "logistics."

When Heinrich Himmler committed suicide on May 23 of 1945, Gudrun, as witnesses recall, was utterly confused. Until now, she refuses to believe this, claiming that her father was killed by British soldiers.
In a rare interview with Gudrun she does not deny her involvement with Silent Aid, but claims she is an ordinary member of the organization: "It's true, I help if I can. But I refuse to discuss my work. "