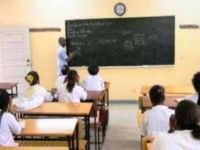 Leaders of the ruling MPLA informed, on Tuesday (07) that here, the capital city of Ingombota, 108,000 adults will be taught to read and write in two years, with the help of Cuban advisors using the method "Yes I can."

The Secretary for Political Affairs and the Social Movement for the Liberation of Angola (MPLA) in Luanda, Norberto Garcia, in a meeting with a Cuban delegation, thanked the Caribbean country for their contribution to the literacy of thousands of Angolans.

For her turn, Joanne Quintas, first secretary of the political organization in the municipality of Ingombota, showed that in this period of independence of this African country, "at present we acquire educational experiences in Cuba."

At this meeting they announced the Ambassador of Cuba in Angola, Pedro Ross Leal, and the Cuban deputy, Luis Ramirez Villasana.

They also held a meeting on literacy in the Korea district, the commune of Quinanga.

"Educating is a beautiful task developed with love in Angola by Cuban professors and teachers," said Rose Fonseca Dourado, third secretary of the Cuban diplomatic headquarters in Angola and that she took part, as a teacher, in the literacy campaign for 34 years.

To conclude the meeting, the Cuban ambassador assessed before those present that the literacy of thousands of Angolans is the best tribute to the 2,077 Cuban internationalists who fell by fighting and defending the independence of Angola.

He also reminded that today, December 7th, was the day of the fall in combat of the Titan of Bronze, Antonio Maceo, as they remember the heroes of the war of independence.

On a day like today, but in the year 1989, culminated Operation Tribute, which made it possible to rest the departed on Cuban soil in a glorious way and in Angola and other lands.