Who saved Moscow from Hitler in 1941? 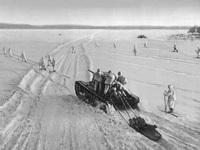 The counteroffensive of Soviet troops on the outskirts of Moscow began on December 5, 1941. The operation ruined Hitler's Blitzkrieg plan. Nazi troops had to retreat 200 kilometers back. It is an open secret that occupying Moscow was one of the key goals of Nazi Germany. Hitler was unprepared for a long war against the USSR.

Many specialists still differ in their opinions about the force that saved Moscow in 1941. Many believe that it was the Siberian divisions that won the Battle of Moscow. Others say, though, that Nazi troops were destroyed by divisions formed in different parts of the country, whereas Siberian and other divisions destroyed the battle-bled enemy in December 1941 - April 1942.

Who is right and who is wrong? Great Patriotic War historians Kirill Alexandrov and Aleksey Isayev shared their views about the dispute with Pravda.Ru.

"I am ready to agree with those who think that Moscow was saved by Siberian divisions. The Siberian divisions are the units relocated from the Asian part of the Soviet Union, from internal regions, presumably from behind the Urals and from the Far East. They started to relocate them closer to Moscow after it became known that Japan was not going to declare war on the USSR.

"The fresh "Siberian" troops pushed the German troops from the Soviet capital. The question of who exactly saved Moscow is a secondary one. The Germans had been exhausted by the time the counteroffensive began. They had destroyed 215 Soviet divisions by that time, which cost them a lot. They could not restore their troops, especially technologically, after such a huge effort. The Germans were extending their front, but they were receiving no reinforcement whereas one destroyed Soviet division would be replaced with two new ones, including those "Siberian" divisions.

"It goes without saying that the cold Russian winter played a very important role in the defeat of the German troops. The German army was not provided with warm uniforms, their weapons with summer lubricants would often malfunction and come out of order, whereas the Soviet troops did not have such problems.

"The help of the allies was also extremely important. The Siberian divisions were advancing in 1941-1942, using Western resources. The allies helped greatly with their petrol and aviation. As a result of the extremely unsuccessful development of events during the second half of 1941, the aviation losses were catastrophic. It is hard to say whether the Moscow counteroffensive would have been successful, if it wasn't for the assistance from Great Britain and the USA.

"Even if the Germans had occupied Moscow, it would not have changed the state of affairs on their front yet. The Soviet Union had colossal man-power and material resources, whereas Hitler did not have the resources for the military actions in the European part of the USSR. Not all Siberian divisions took part in the Battle of Moscow. Many of them stayed along the Far Eastern border.

"Siberian divisions were invented by the Germans, who tend to think that any person wearing warm winter clothes is a Siberian. It goes without saying that Siberian troops contributed greatly to the destruction of the Germans near Moscow. The main role, however, was played by the troops formed from the residents of the Moscow region, Ural and Udmurtia republic. During the renowned parade on November 7, 1941, a division from Ivanovo (the Moscow region) marched across Red Square," the historian said.