Truth and lies about 'most humane' bomb in the world 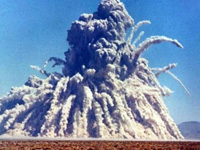 Many years ago, Soviet schoolchildren were told many blood-chilling stories about a super bomb developed in the United States. It seems strange, though, that the country that built the bomb was the first to discard it as weapon - during the 1990s.

The father of neutron weapons, US scientist Samuel Cohen, died on November 28. It was Cohen, who put forward the idea of the first-ever neutron bomb in 1958. Years later, this weapon evolved into a scarecrow, about which there were many scary stories in the USSR.

The distinguishing factor of the neutron bomb is that many of the neutrons that are used in building up the chain reaction are instead allowed to escape. The resulting radiation is extremely destructive to matter, slicing through it easily. Up to 80 percent of the power of the explosion is made of the energy of the current of fast neutrons. Other destructive factors make up 20 percent - the blast wave, the electromagnetic impulse and radiation. The inventors of the neutron bomb said that they had developed a bomb that was more humane than the traditional atomic bomb or the Soviet H-bomb. The explosion of the neutron bomb, they said, would not cause considerable destruction on large territories.

The statement about inconsiderable destruction was not true to fact. The first tests of the bomb showed that all constructions located on the territory of one kilometer around the epicenter of the explosion were destroyed completely. This, of course, pales in comparison with the destruction caused by the atomic bomb in Hiroshima, or what the Soviet H-bomb could do. In general, the neutron bomb was invented to only destroy enemy's manpower rather than cities and infrastructure.

It happened because of the neutron radiation which occurred during the explosion - the current of neutrons which transformed their power in interaction with atomic centers. Neutrons possess a very high penetration effect: there is no charge, so their interaction with the substance, through which they penetrate, is very weak. Nevertheless, the effect depends on their power and the structure of atoms of the substance, which happens to be in neutrons' way.

Many heavy materials, for example, metals used in the production of armored plating for military hardware, were poorly protected against neutron radiation, although they could be resistant to gamma rays that appeared as a result of the explosion of a conventional nuclear bomb. The idea of the neutron bomb was based on the assumption to increase the efficiency of destruction of armored targets and people.

The armored hardware of the 1960s was highly resistant to all destructive factors of nuclear weapons. Even the use of a conventional nuclear bomb could not lead to significant losses for the enemy protected with strong armor. The neutron bomb was supposed to solve that problem.

Experiments showed that the explosion of a low-powered bomb (1 kg TNT) produced highly destructive neutron radiation, which eliminated all living organisms within a radius of 2.5 kilometers. In addition, neutrons, penetrating through many protective constructions, such as metals, for instance, triggered the appearance of so-called induced radiation. Neutrons are capable of entering into nuclear reactions with atoms, producing radioactive isotopes as a result of such reactions. Induced radiation preserves for several hours after the explosion and becomes an addition source of destruction.

The neutron bomb does not entail long-term radioactive pollution of the environment. The creators of the bomb said that one could approach the epicenter of the explosion already in 12 hours. An explosion of a thermonuclear bomb pollutes the environment within a radius of seven kilometers for several years.

The nuclear charge technology was invented in the United States during the second half of the 1970s. The production of nuclear warheads with neutron charges was launched in 1981. However, neutron weapons were in the inventory for a very short period of time - a little more than ten years. The announcement of the development of neutron weapons triggered the development of protective means and systems. New types of armor were invented soon afterwards. Military scientists used plates of boron (a fine absorbent of neutrons) and added depleted uranium to steel. The composition of the new armor excluded the elements which previously led to the appearance of induced radiation. Therefore, the new developments minimized the danger of the neutron weapon.

As a result, the country that invented the world's first-ever neutron bomb became the first country to refused from it. The last neutron-containing warheads were decommissioned in the USA in 1992.
Nowadays, it is impossible to say for certain whether the "humane weapon" has been left anywhere in the world. In addition to the United States, France, Russia and China were also developing the neutron charges technology. US defense officials say nowadays that there are no neutron warheads in the national arsenal. Can Chinese officials say the same?