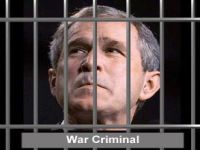 The ratification of the Convention against Torture and other mistreatment or cruel, inhuman or degrading treatment, in 1994, seems to have had much significance to the United States of America (USA). According to Amnesty International (AI), the country's former president George W. Bush authorized at the time of his government, that which would be called "enhanced interrogation techniques" on detainees in secret custody.

The former U.S. president confirmed earlier this month when he published his memoirs, that he personally authorized the use of techniques such as waterboarding and other torture against so-called "high value detainees" who violated the international prohibition of torture and other cruel, inhuman and degrading treatment.

Therefore, Amnesty International has filed to request a criminal investigation, in the last 10 days, against Bush and other U.S. government officials. The director general of AI, Claudio Cordone, said that the admission by the former U.S. president is enough for the country to fulfill "its obligation to investigate his actions" and to prosecute him.

In his memoirs, George Bush reported on cases of prisoners in this secret program. One example is that of Abu Zubaydah who had been detained from April 2002 until September 2006, in several undisclosed locations. In August 2002, Abu had been subjected to more than 80 simulated drownings.

Khalid Sheikh Mohammed was also subjected to simulated drowning, but a much larger number of times: 183, soon after his first month in prison, according to a report from the U.S. Central Intelligence Agency, the CIA. Mohammed was arrested in Pakistan in March 2003 and put in secret CIA custody.

After three and a half years of being held incommunicado in detention and incommunicado in secret centers, Khalid Sheikh Mohammed was transferred to military custody at Guantanamo, where he and Abu Zubayhdah were subsequently detained without trial, along with over 150 others.

"Under international law, every person involved in perpetrating acts of torture must answer to justice, and this does not exclude the ex-president George W. Bush. If you confirm the facts that can be found, the United States has an obligation to prosecute him," Cordone emphasized. He added that "if the U.S. did not launch an investigation, other states must step in and do it."

The ratification of the Convention against Torture and other mistreatment or cruel, inhuman or degrading treatment should mean that all cases showing evidence of torture, with direct participation or complicity, are brought to trial. The document is not clear how people who have held public office would be allowed to be exempted from the proceedings.

However, the United States Justice Department announced on November 9, they will not press criminal charges against anyone because of the destruction in 2005 of nearly 100 video tapes with recordings of interrogations of Abu Zubaydah and Abd al-Nashiri, another prisoner of secret CIA program. The destruction of the tapes likely means the crimes committed by the government will be hidden.

According to the Justice Department, after a "thorough investigation" on the issue, a federal prosecutor concluded that criminal charges would not be made for the destruction of interrogation tapes.