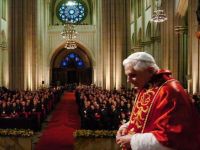 Pope Benedict XVI accepted the resignation of Luis Carlos Eccel, Bishop of Huntingdon (Santa Catarina, Brazil), who supported Dilma Rousseff for the presidential election. She was criticized by the Catholic Church for her positions on abortion. The announcement was made on Wednesday by the Vatican.

Benedict XVI accepted the resignation of Bishop Eccel "in accordance with Article 401, paragraph 2, of the Code of Canon Law," the Vatican said in a statement. This article provides for resignations "for health reasons or other grave cause."

This bishop, 58, would not have been considered as remaining faithful to the Catholic Church to openly support the candidacy of Dilma Rousseff, who was elected president on October 31.

She was a target of the Catholic Church and evangelicals due to her position about being in favor of legalized abortion. The candidate of the Workers Party said before the second round would she would not change the law.

During the election campaign, the bishop of Guarulhos (Sao Paulo) issued a manifesto against Dilma, the person chosen by President Luiz Inacio Lula da Silva to succeed him, and tried to presented her as "the candidate of death."

Three days before the second round on October 28th, Benedict XVI said upon receiving the Brazilian bishops, the priests had "a duty to proclaim a moral judgement, even in politics," when "the fundamental rights of the person or the salvation of souls requires it."

The declarations were received in Brazil as an implicit support to the candidate of the opposition Social Democrat, Jose Serra.