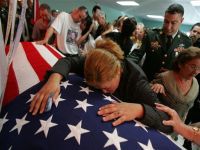 The list continues to grow inexorably. It contains the names of those who returned home from the trenches of the war against terrorism, but lost control of themselves, a war that has left more dead than the U.S. mission in Afghanistan.

The figures demonstrate the drama. More than 1,100 American veterans have committed suicide between 2005 and 2009. These are the numbers revealed and released by the U.S. DoD (Department of Defense). To further clarify, this is an approximation by default and there is no complete data of a phenomenon that has become a national emergency.

It is a number even the Taliban and Afghan warlords have not been actually able to inflict on the U.S. military during the eight years of the conflict. What has hit harder is the mixture of depression and loneliness that has been provoked. The situation does not show any signs of improvement.

The numbers speak of a rapidly growing phenomenon. The DoD recorded 267 suicides in 2008, and 309 the following year. But the Department of Veterans Affairs (DVA) provides different figures. In 2009, the total was 707 suicides, of which 98 are veterans who returned from Iraq and Afghanistan. Another 10,675 soldiers attempted suicide of which 1,868 had fought in the two main fronts of Washington in the fight against terrorism.

To generalize, approximately 20% of the 30,000 persons who decided to commit suicide in the U.S. are veterans. More than 6,000 soldiers per year, according to 18 newspapers. Statistics show that the suicide rate among the civilian population is 11.1% per 100,000 inhabitants and among the military 12.5%

Years ago the alarm sounded, more precisely since 2003, when the offices of senior managers started to get early reports showing this disturbing trend within the military. Since then, the link was revealed between increased suicides and the missions in Iraq and Afghanistan.

Washington responded by choosing the path of mental health treatment. In 2004, the VA approved the Comprehensive Strategic Mental Health Plan in order to reduce the number of soldiers who decided to end their lives. The Department continued incorporating mental health specialists being provided and today have 20,000 specialists, including doctors and assistants.

Since July 2007, a hotline was installed, aimed at veterans with suicidal intentions with experts ready to provide immediate help, if only by phone. The number of hope is 1-800-273-8255, option 1. As expressed by Dr. Janet Kemp, the anti-suicide program coordinator for the Veterans' Department, there are more than 10,000 phone calls every month to this phone.

Up until now, it has been credited with saving 7,000 lives. And since July 2008, the service has also incorporated its activities to social networks through the creation of an open chat in a specific section of the DVA website: depressed soldiers or their friends and acquaintances can chat anonymously, alert about cases and request assistance.

The profile of the suicide

There is an extensive network of medical centers in the Department of Veterans Affairs. This year, the army center in Denver received $17 million to launch, along with Florida State University, the creation of a center for research on suicide in the military. The goal is to draw as accurate a profile as possible of the soldier at risk, so that they can be served immediately. It is already known who the potential victims are: likely to be male, very young between 18 and 29, boys who do not yet have a life project in which to return to upon going home from the war.

The return is the detonater: the trauma they experience during the conflict ignites upon having faced their new realities. Then the soldier is alone, without a support group and ends up being a prisoner of his own demons, flanked by alcohol and drugs. But the mental problems that have plagued many veterans have been exacerbated by the economic crisis, joblessness and the loss of their homes.

For these reasons the U.S. military is trying to build a support network designed to accommodate a soldier upon his return from the mission. Its importance is very familiar and explained in simple terms. Eric Shinseki, a hero of Vietnam and now head of DVA: "You can heal and stitch up the wounds of the body, but the spirit does not have the same solution."