Slaughter carried out by the Moroccan government 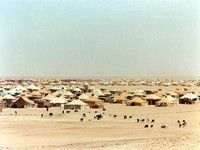 Newly arrived Spanish observers in El Aaiun report the slaughter carried out against the Sahrawi people. The consequences are the direct death of Saharawi, arbitrary and indiscriminate arrests, trials without evidence, police and military harassment of the defenceless population is constant. Also, they denounce the information manipulation and censorship by the Moroccan monarchy, the indifference of the international community and the execrable attitude of the Spanish government.

Javier Sopeña and Silvia García, belonging to the group Thawra, arrived last night from El Aiun with the aim of denouncing human rights abuses committed by the Moroccan monarchy against the Saharawi population in the militarily occupied territories.

Both observers have been witnesses of all these events during the last weeks in Occupied Sahara, since the uprising of the Dignity Camp and later its destruction, also the brutal repression which followed.

They have seen first-hand how the Dignity Camp was destroyed as they wildly beat on helpless Saharawi as their belongings were looted. They have also witnessed subsequent repression in the city of Laayoune, the news blackout and comprehensive control by Moroccan police and military. Faced with the inability to conduct their work and to avoid jeopardizing the Saharawi that gave them coverage, they yielded to pressure from both Spanish and Moroccan governments that wanted them out of Laayoune. They decided to return to Spain to report first-hand what happened there.

Also, both observers denounce the Spanish government's attitude to the civilian slaughter carried out in Dignity Camp and subsequently in Laayoune. Some events are unprecedented in the 35 years that Western Sahara has been occupied that needs no research, but a firm position of revulsion at the violation of human rights committed, and a firm commitment to resolve the conflict in the terms agreed in the peace agreement of 1991. That is to say: the realization of self-determination for the Saharawi people according to the referendum.

The Saharawi people have systematically been oppressed, tortured and imprisoned by a Moroccan regime which invaded the territory, attempted to repopulate it and refuses to abide by international law and hold a free and fair referendum on the status of Western Sahara.