Were the elections in Myanmar (formerly Burma) on Sunday an important first step towards democracy in a country ruled by a military junta for two decades or were they a farce, a mockery of the precept of free and fair suffrage and an insult to the international community? 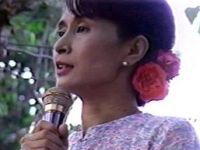 How can an election be termed free and fair when the results of the last one, massively in favour of Aung San Suu Kyi's National League for Democracy (NLD), were disregarded by the military junta?

On Sunday, Myanmar's 29 million voters chose among 37 political parties for the two chambers of Parliament plus regional assemblies, a total of 1160 places in national and regional government.

At least a quarter of these are reserved for the military, and many more officers who retire can present themselves on civilian lists for the other places. Indeed, when the National Assembly (Parliament) chooses the President, this could very well be General Than Shwe, Myanmar's strongman, after he exchanges his uniform for a suit and tie.

Absent from these elections was the National League for Democracy, which preferred to boycott the process rather than to disown its leader Aung San Suu Kyi, Nobel Peace Prize-winner, imprisoned or under house arrest for the last two decades. This resulted in a fragmentation of the NLD, which was dissolved and a new movement called the National Democratic Force appeared.

This in its turn will have strengthened the hand of the political parties close to the military junta, which are expected to have done well in Sunday's low turnout, namely the National Solidarity and Development Party and the National Unity Party. Unity is the key word in Myanmar today, where Shan and Karen minorities have taken up arms against government forces.

20,000 people have fled across the border to Thailand around the town of Myawaddy after fighting between government troops and Brigade 5, a splinter of the Democratic Karen Buddhist Army.

Whatever the result, whenever it is announced, any election in Myanmar which does not count on the full participation of Aung San Suu Kyi and the full membership of her political party, cannot be described as anything more than a sham, a farce and an insult to the international community.