Remember, remember the fifth of November...

November the fifth is Bonfire night or Fireworks night in the United Kingdom. Is it the first festival of the Festivals of Light which begin when the nights draw in and end at the time of the Fertility Festivals at Easter, or is it simply a commemoration of a historical event? 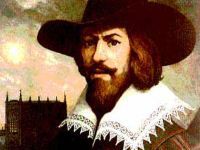 Guy, or Guido, Fawkes, or Foukes was born in York on April 13, 1570. When he was 35 years old, on November 5, 1605, he was involved in a conspiracy to kill the Protestant King, James VI of Scotland and James I of England, who had inherited the crown from his (distant) cousin Elizabeth I (daughter of Henry VIII). Known as the executioner of the Gunpowder Plot, Fawkes became the emblem of Catholic saboteurs as the Protestant element surrounding the crown tried to implant their cause in a reluctant England seriously divided between the old and new religions.

Why? Because he was caught guarding barrels of gunpowder placed under the House of Commons, intended to assassinate King James and the majority of the Members of Parliament. After a week of torture, he signed a declaration of guilt and along with his co-conspirators, he was executed in 1606 for treason and attempted murder.

Guy Fawkes was a soldier and an expert in explosives. He was converted to Catholicism at 16 years of age and it is said that he changed his name from Guy to Guido, because he wanted to adopt the Spanish version of his name (Spain being the champion of Catholicism at the time).

The Protestant element in the Government took full advantage of this, and soon afterwards, the date was commemorated as Bonfire Night and later, Fireworks Night. In many villages, a cloth dummy is made, called the "Guy" and is wheeled from house to house by children, who ask for "a penny for the guy". Then on the night of November 5, a bonfire is made in most villages and towns, and the guy is thrown into the flames. Today, a fireworks festival is held and traditionally, people drink gin and beer and eat sweet chestnuts.

Yet is the fifth of November about Guy Fawkes and his master, Robert Catesby? Or is it a pretext to celebrate the first of the Festivals of Light which appear when the days draw in and the nights are longer?

In most European countries, there are bank holidays around this time of year, the Death of the Agricultural Year, starting with Hallowe'en (the evening before the halos, or Saints) on October 31, the day before All Saints' Day (November 1) and All Souls' Day (November 2). Other countries and cultures celebrate the festival of the dead around this time...which always coincides with the death/end of the agricultural calendar.

Festivals of Light, the mechanism which controls agricultural communities, gathering the community together, seeing who has and who has not, who needs and who can provide, symbolically spreading the message of sharing the produce among the members of the community.

If we study these festivals in European societies, we see that some were imported to the New World, lost in Europe and then re-imported (Hallowe'en) and we see that most countries perpetuate these Festivals of Light from when the nights draw in to when the Winter ends, culminating in the Fertility Festivals at Easter.

And how many people know that the origin of the egg and the rabbit is connected with pagan fertility symbols of eternity and fertility, depicted by fertility goddesses at New Year (not the first of January but when the agricultural year began, at Easter).

If our modern Easter is the descendant of Eostre, the Pagan Goddess of Fertility, can we really say that Guy Fawkes' night has anything to do with Guido Fawkes, or has it more to do with political propaganda from those who wanted to press the cause of the protestant King James I, while they covered up his sexual perversions and homosexuality?

"Remember, remember, the 5th of November
The gunpowder, treason and plot;
I know of no reason, why the gunpowder treason
Should ever be forgot."

This popular saying perpetuates whom, and what?