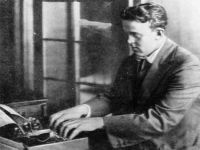 John Reed, the unforgettable American journalist and writer, was born 123 years ago. Insurgent Mexico was consolidated with his outstanding reporting on a revolutionary people in arms that Francisco Villa recognized as one of its key leaders.

The talent and the convictions of John Reed would allow him to later write another masterpiece, where he would offer the truth about Russia that on the streets decided to transform the reality we live in, shaking the planet and successfully promoting Lenin's Bolsheviks with the famous Great October Socialist Revolution of 1917. His book "Ten Days That Shook the World" has been read by millions of people.

John Reed was a principal founder of the Communist Party of the United States of America. As a delegate representing his party, he was elected to the Executive Committee of the Third Communist International. He also participated as a revolutionary leader in the important Congress of the Peoples of the East held in Baku.

For his work as a chronicler of historical and social events, he was recognized as the best war correspondent. But his revolutionary ideas also caused him to be threatened and persecuted by the U.S. government and they expelled him from the country. He was given asylum in the Soviet Union.

John Reed is considered one of the greatest journalists of all time.

With intelligence, courage and honesty, John Reed shows us clearly how it is possible to practice journalism with dignity, offering respect for the right to information. As humans, we have to better understand reality and try to transform it to live in peace and harmony. That's why John Reed is remembered especially by all those who follow his example. As in the case of Julius Fucik, to keep alive the much needed profession today.