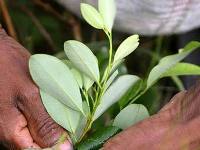 The government of Bolivia refused to pass the new law which could cut the production of cocaine in the country. The law lowered the limit of coca leaves which local farmers could sell. The law has been withdrawn over farmers' protests. Bolivia is the world's third largest producer of coca.

The law limited the monthly production of coca from 7 to 2 kilos. The nation's President Evo Morales does not conceal his positive attitude to coca leaves. He acknowledges that the cocaine production is a serious problem, but claims that coca is a traditional herbal product, which local people consume as food as use in the production of medicines and cosmetics.

Evo Morales served as the leader of the trade union of coca manufacturers for many years. He became the president of the country owing to the help of the votes from his trade union. Consequently, the failure of the above-mentioned law became a personal achievement of Morales and his electors.

The history of growing and consuming coca leaves in the country counts thousands of years. However, this narcotic tradition has never triggered any considerable problems for the nation.

The narcotic effect of the coca leaves is smaller than that of caffeine. Coca leaves is the only option for many Bolivians to work 15 or even 18 hours a day. Traditionally, the poor population of the country uses coca leaves as a stimulant. The leaves help people perform hard physical work in highlands and mines.

Cocaine is a chemically synthesized concentrate of coca leaves which considerably enhances the narcotic effect.

Practically all plantations of coca are situated in Columbia, Bolivia and Peru. The harvest subsequently provides nearly 90 percent of all cocaine produced in the world. Nearly 45 percent of coca is produced in Peru. Columbia grows 39 percent, and Bolivia comes third with 15 percent.

In Bolivia, coca grows all the year round on 27,500 hectares of land. Bolivia specializes on the production of concentrate - the so-called coca paste, which is then used for the production of the narcotic - cocaine hydrochloride.

The production of cocaine in Bolivia doubled after Evo Morales won the election in January 2006. Promoting the politics of "down with cocaine, long live coca", Morales offered to establish the production of soft drinks, chewing gum and soap based on coca leaves, which raised serious concerns with the United States. Officials, drug mafia and anti-narcotic structures will lose their sources of wealth in case if light narcotics are legalized.

Many experts say that the drug business brings billions of profit only because this business is banned. The production of this product is just as cheap as the production of aspirin, but drug addicts have to pay much more to cover producers' and sellers' risks.

Such a state of affairs is perfect for both the drug mafia and anti-drug structures that may lose their jobs, funding and corruption income in case the drugs are made legal.

The struggle against drugs and all of the anti-drug propaganda is just a phantom: the production of heroine in Afghanistan (controlled by the USA and Britain) has grown many times during the recent years.