Margaret Thatcher, or Baroness Thatcher of Grantham, today celebrates her eighty-fifth birthday in a United Kingdom which bears the hallmarks of her tenure in Government between 1979 and 1990. As she looks back twenty years after she was forced to retire from front-line politics, bathed in tears as her car pulled away from Number Ten, will her name grace the golden pages of the annals of political history as the Iron Lady or the Milk Snatcher? 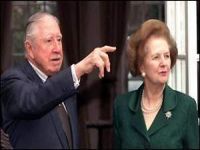 Asked to write this piece on Margaret Thatcher, I was caught between the urge to allow my fingers to fly furiously across my keyboard, breathing fire and brimstone into a piece bordering on the venomous and the basic values drilled into my generation, which include respect for the elderly, especially elderly ladies. But this elderly lady put a stop to free school milk for primary school children (hence the term Milksnatcher). Hmmm.

To be kind, one could say that this lady entered politics as Margaret Thatcher and left it as Baroness Thatcher of Grantham, two people at two different times, both of whom belonging firmly to the past, a past shaped by values which no longer exist in the hearts and minds of today's Britain, which the brashness of the Thatcher "on yer bike" Government shaped.

Shaped, how? Through laboratory politics practised by academics and career politicians who had never done a decent day's work in their lives, public services were seen as a nuisance and as Thatcher herself cavorted with the weird and wonderful liberal monetarist theorists from the other side of the pond (such as Milton Friedman), the seeds were sown for the dismantling of the welfare state. And society itself.

Massive public disinvestments rendered school accommodation unusable, hospital buildings with walls falling down and public transportation downright dangerous to use. The cherry on the cake was the Poll Tax, the Mother of Laboratory Policies, which more or less ran along the following line of thought: public services in area A cost X. The population of area A. is Y. Therefore divide the cost X by the number of inhabitants Y and because they all use the same services, the cost will be the same for all, Z.

No regard for the poor. No regard for the needy. Cater for the rich, keep the wealthy happy and the others? "On yer bike" (meaning get up and improve your life by yourself). This might work well in the wilderness of the interior of the United States of America, where communities have formed other mechanisms in order to be able to function. It did not work in the United Kingdom, Europe (at least in name), the inventor of the welfare state.

It seemed that Thatcher was as hell-bent on erasing this state in which she had grown up as she was in trying to erase her own humble roots (daughter of a shop-keeper) and her style of government was indeed similar to running a shop, a small business, in which those who wish to work 20 hours a day (as she did) progressed better than the lazy sods who dragged their feet working 9 to 5. Therefore, the bottom line was a "to Hell with them, let them provide for themselves" style of government. The antithesis of State interventionism.

This approach may have worked well in Grantham, a small town in which she grew up, and no doubt where people still followed the age-old practices of Middle England, respecting their elders, working for the community on a voluntary basis, practising decent ethical values in their daily lives. In 1979 and before.

However, in implementing the liberal model on a nationwide basis, Margaret Thatcher laid the foundations for destroying the social fabric of the country which she had inherited, creating the phenomenon of the "yuppie", (young upwardly-mobile person), catering for the "woopie" (well-off older person) and devil take the hindmost, reducing the social umbrella in some cases, removing it in others.

In the absence of this social umbrella, the public services fell apart and due to the fact that people were staying less and less in their communities and getting "on their bikes", and to the fact that community programmes were slashed by Milk Snatcher Thatcher, the first tangible results were Cardboard City in London, the Miner's Strike, as the Unions reacted to an intrusion into their acquired rights and massive unemployment, as a first stage.

The second was that the "yuppie" morphed into the beer-swilling, drunken, knife-wielding, drug-snorting "hoodie", which move around in herds belching, throwing beer cans or bricks at innocent passers-by, swearing and rendering bus stops and railway stations dirtier than if they had been used as pigsties for the previous century and a half. This is the reality of interior towns today, this is the legacy of Thatcherism. She was the one who sparked racial tensions in the UK and with Commonwealth member states, talking of the "swamping" of British culture by immigrants, she is synonymous with 3 million unemployed

Abroad, Thatcherism is remembered for the Falklands War (1982 - an ace card for re-election) and for her nickname The Iron Lady, a baptism attributed by the Soviet Defence Ministry journal Krasnaya Zvezda (Red Star), in response to a sabre-rattling speech delivered in January 1976 (it is not clear whether it was before or after lunch) in which she claimed the Soviets "put guns before butter". However, what about a foreign policy which saw her selling arms and providing credit to dictators such as Chile's Pinochet and Indonesia's Suharto and oil deals in which the hands of her millionaire husband Denis and son Mark were reputed to have been involved?

Firmly opposed to German reunification, her anti-Federalist position on Europe created a split within her own Conservative Party, which throughout the Thatcher years was far more popular than its leader (she oscillated between an approval rating of 40 per cent and a peak of 55 per cent).

In the end, with Labour leading in the opinion polls for 18 months and Thatcher sticking firmly to her guns, her own party ditched her. "Bitch in the ditch" said some. And the whole world breathed an audible sigh of relief.

Hated at home, derided by an international community more intent on dialogue and debate and sick of shrieking diatribes, Margaret Milk Snatcher Thatcher can look back on a legacy which leaves much to be desired. Due to her, the British public services were so horrifically under-funded that the financial black hole left by New Labour was inevitable from the beginning.

In trying to destroy State interventionism, she tolled the death-knell of liberalism and guaranteed that once and for all, the social vector of the public finance model must remain indelibly as a constant factor.

Marks out of ten? Two, for trying. Plus they say she makes an awesome lemon merengue tart. Her epitaph? Attila the Hen.