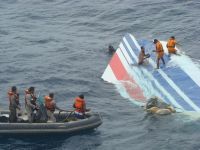 The High Court of Var, in southern France, acknowledged "the existence of a crime" in the crash of Air France Flight 447, which sank in international waters in the Atlantic Ocean after taking off from Rio de Janeiro, Brazil, to Paris, France, on May 31, 2009. The crash killed all 228 people aboard, including crew and passengers.

The crash of Air France Flight AF-447 was assessed by accident experts as one of the most expensive in aviation history, reaching 700 million euros.

With this decision, the Court defined the crime as "manslaughter" without intent to kill. The families of accident victims with the Air Bus A330 aboard Air France Flight 447 will not need to wait anymore for the outcome of the investigation to seek damages.

In accordance with the Provisional Order, the problems occurred due to the Thales AA brand speed sensors (pitot), as in previous flights of AF-447, which are sufficient to constitute a crime. Calibration errors of the speed sensors on the Air Bus aircraft, equipped with probes, had been verified over a dozen times before the accident, including for the company Air Caraïbes.

The company's technicians had then alerted the Air Bus aircraft manufacturer, that sensors clogged by ice could result in a chain of failures in the navigation systems of aircraft.

"The coexistence of previous failures and the failure observed on the night of the accident, affecting two pitot probes, are sufficient to indicate the existence of a crime, characterized as the crime of manslaughter," reads the decision.

Also, in accordance with the court decision, there is no need to wait for the investigations underway in the Office of Research and Analysis for Civil Aviation (BEA) and the Public Prosecutor of Paris to recognize the implication of speed sensors among the causes of the accident.

"It is neither necessary nor even desirable to await the outcome of ongoing criminal investigations," said the Court of Var, which also decided that the Guarantee Fund for Victims of Terrorism and other offenses, maintained by the French government, should compensate the family of Franco-Argentine stewardess Clara Amado with 20,000 euros, 10,000 euros for the father of the victim and another 10,000 euros to a brother.

The decision not to wait for the results of experts is unprecedented in the French court and a precedent for other victims' families asking for compensation. The value, however, must still be discussed, since some families ask for hundreds of thousands of euros in compensation.

Rather than assigning a value to the family of one victim, the decision calls into question the argument of the civil aviation authorities of France, which until now claimed that without the discovery of the black boxes - lost in the Atlantic Ocean along with the debris of the plane - it would never be possible to discover the causes of the disaster.

Since the international press - between it and PRAVDA Ru - revealed the automatic messages sent by the Air Bus A330 before the crash, the hypothesis of fault of the Thales AA Pitot probes is considered by independent experts from France as the most likely explanation for the accident.

One also cannot rule out negligence in the crash of Air France Flight 447, the lack of equipment and faulty operating systems of the aircraft, as well as showing off by the pilots in the cockpit. Furthermore, it could have been avoided had they avoided the storm in the region at that time.