It is trendy to do culinary tours to foreign countries. Many Russians return home and include Japanese sushi, Indian spices, or even frog legs in their daily menu. Many tasty meals from overseas can be ordered online and enjoyed at home. What are the advantages and disadvantages of different cuisines? 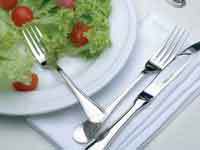 It all begins with the type of oven used for cooking by fathers of different nations, nutritionists say. For example, the Russian oven has always been used not only for cooking but also for heating the house and therefore worked around the clock. This led to the fact that Russian cuisine exhibits a great deal of methods of thermal food processing, including stewing, baking, lengthy boiling etc.

In countries with warm climates, the stove was usually located under the open sky, so the local cuisine is dominated by dishes cooked on a spit or on the grill.

In Asia, where nomadic lifestyle was predominant, the food was usually prepared in field conditions, on heavily diluted flames. Since then, the main method of heat processing of products in Asian cuisine has been frying. Now let us look at one of the most famous and healthful cuisines of Europe - the French.

Its special features include abundance of greens, exotic vegetables and root crops - artichokes, asparagus, leek, and Brussels sprouts. Vegetables are not only used as a garnish, but also served as a separate dish. This provides vitamins and fiber that are good for the intestines.

Another prominent feature of the French meal is sauces. Over three thousand types of sauces have been registered in France. The goal of sauces is twofold: they diversify food and contribute to better digestion. Incidentally, milk and dairy products are not that frequent on a French table. The only exceptions are cheeses. Natural wine is found everywhere - on the table, and in many dishes where it is added during the cooking process. Red wine is believed not only to help digestion, but also normalize blood lipids, preventing atherosclerosis.

Meat, fish and egg dishes like omelets, poached eggs and soufflé with vegetables are very popular. Numerous spices are used for cooking.

The disadvantages of French cuisine include fatty foods (pâté, foie gras, and butter) and the risk of poisoning with not fresh shellfish (oysters and mussels). In addition, the French food is usually difficult to cook under 5 minutes. This is a fairly laborious process.

The basis of the Chinese diet is rice, beans, vegetables, meat, fish and seafood. In China, almost everything that grows and everything that moves is consumed as food. You can talk about waste-free culinary production.

Their culinary motto is a "combination of incongruous things." For example, meat and poultry are often cooked in fish broth, which changes the taste beyond recognition. 70% of the time that the Chinese spent cooking goes to the preparation that includes rigorous cleaning of the product, and a long marinating process.

Yet, the heat treatment is extremely short - the dishes are fried in a large amount of oil over high heat for about 2-3 minutes, and constantly stirred. Such a method of cooking allows you to keep most beneficial vitamins and minerals in the product.

The Chinese never use salt, but add soy sauce, spices or MSG. It enhances memory and nervous system, but can cause an allergic reaction, especially in Europeans.

The Chinese eat rice several times a day. They also make rice flour, which is subsequently transformed into all sorts of breads, Chinese noodles, and dumplings with different fillings. Invariably, the Chinese cuisine offers legumes - soybeans, peas, and lentils. Some Chinese dishes are true energy boosters.

However, while enjoying Chinese food, one needs to remember that it is usually high in calories. Those overweight should not eat it too often. In addition, the frying oil is usually not changed during the day, so it contains many carcinogens. Chinese menu also contains too few fresh fruits and vegetables.

Food of the samurais

Salt is not used when cooking in Japan, or in China, which prevents cardiovascular disease. And the secret of Japanese grace is their daily energy intake, which on average is only about 1200 calories, which is half of the European level.

The Japanese eat 50 times more fish than Europeans, 17 times more rice, and 3 times more grains. This looks like a very effective weight loss tool that can help you get rid of 5 to 9lbs a month.

The four pillars of the Japanese diet are fish, seafood, rice and soybeans. Rice replaces bread for the Japanese. Soybeans in the form of grain, vegetable oil, yogurt or tofu are not only a source of protein, but also a preventive measure in the fight against cancer and cardiovascular disease.

Fish enriches the body with proteins. The main Japanese drink is green tea. From the standpoint of dietitians it is a storehouse of antioxidants, vitamins C and E which slow the aging process and prevent certain types of cancer.

However, raw fish and seafood is the main source of worms. By some estimates, about 70% of Japanese suffer from various helminthes. Lack of fruits and vegetables with plenty of rice often leads to constipation. A lack of dairy products leads to lack of calcium.

What they eat in India

The basis of diet in India is vegetarian food. Classic vegetarian diet consists of rice, maize, beans and tortillas made of flour of lower grades. Preferred dairy products are yoghurts. The most popular dish is risotto with beans cooked with vegetable oil.

All Indian dishes are very hot because of the abundance of spices. The main drinks in India are tea and coffee. All together it is a haven for opponents of the use of animal products. This diet protects cardiovascular system from atherosclerosis, is rich in fiber and vitamins.

Long-term consumption of food with low protein content sharply increases the likelihood of anemia. The abundance of spices is contraindicated for people with diseases of the gastrointestinal tract.

We have already spoken about the Russian oven. Now let us recall that the fertile Russian territories generously presented the Slavs with their wealth, which were virtually impossible to consume in one sitting.

Therefore, people had to invent ways of long-term preservation of products in the most holistic form by fermentation, salting, drying, curing and freezing. This is how an entire group of national Russian dishes was created. Sauerkraut is still the leader of the Russian culinary hit parade.

Major Russian dishes are cereals, filling soups and snacks - both hot and cold. No other national cuisine has such a wide choice of drinks. Moreover, some of them like mousse, jelly and fruit drinks are Russian know-how. Russian cuisine is famous for its wide variety of dairy products. Fatty cottage cheese and sour cream are not found anywhere else. Kasha cooked with milk is a purely Russian invention.

Although the traditional Russian food is quite heavy (it is dominated by products of animal origin), it is justified from a practical point of view, because in Russian climate a lot of energy is spent for warming up. Lengthy religious Lents always served as detox. During the two forty-day and two two-weeks fasting the body has time to relax and clean itself.

So think twice before you decide to get into "foreign" for the Russians cuisine, and even more so, completely switch to an exotic diet. Nutritionists do not recommend that. An exception is made only for the French-Mediterranean diet.

People have been getting used to their national diets for centuries, and, as a result, Japanese, Chinese, Indian and Russians have different composition of bacteria in the intestinal microflora. And if, say, the Japanese suffer from helminthiasis for the entire life and live a long time, a parasite in a Russian stomach may be a much more serious deal.

Likewise, a person who ate rice cakes, after eating Russian bread, can easily end up in a hospital with severe indigestion.