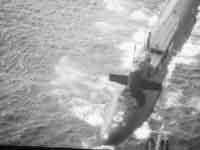 It happened 24 years ago: Russian atomic submarine with operational-tactical number K-219 (in the Soviet Union ships were not named after cities) sank in the Sargasso Sea, in the infamous Bermuda Triangle. The causes of death of the missile submarine of strategic purpose (SSBN) with 16 ballistic missiles on board are as mysterious as the reasons for the sinking of the Kursk.

At one time I had to serve in the famous 19th division of nuclear submarines in Gadzhiyevo - the same division the sunk 219-I was assigned to. I know the story of that terrible disaster, so to speak, firsthand - from the surviving crew of the submarine.

On October 3, 1986, the submarine K-219 had been in the autonomous navigation for about 30 days. After surfacing for a communication session and determining the location, the icebreaker went to the depths from the periscope position. And suddenly water gushed from one of the missile silos on the left side of the ship. Explosion shook the ship, outboard pressure crushed the body of the missile. Water began to come into the bay. Three people - the commander of the missile warhead, and two sailors were killed immediately.

An emergency alert was announced on the submarine, it emerged. Despite sealing the compartments and the struggle for survival, poisonous fog light of orange color from the components of rocket fuel caught in the 4th rocket section still spread through the damaged pipeline. Many sailors were poisoned by the fumes of nitrogen oxides. In some areas pollution level exceeded the legal limits by 2-3 thousands of times.

There were several attempts to drain the fuel components and pump the missile silos with seawater. But the main missile specialists died in the explosion. The task remained unfulfilled. The crew fought to save the ship for nearly fourteen hours when the 6th compartment sent a report to the central office: there was a fire in the 5th compartment; a gray-brown smoke was visible. Fifty minutes after that reactor protection got activated. Compensating gratings (CR) that shut down the reactor were to automatically go down. However, this did not happen, they got stuck.

The drives of compensating gratings received no power. From the moment that the emergency protection was triggered, it became clear that they will not be able to get the power to the CR, everyone clearly understood that the most important thing was to shut down the reactor. CR had to be manually dropped with a special handle - this was provided by the design. Sailor Sergei Preminin, who lowered the CR, has remained in the reactor compartment forever as the bulkhead doors got locked under pressure. He went down with the ship.

When it became clear that the icebreaker cannot be saved, that even in tow it would not get to the nearest base, the crew abandoned the ship. The struggle for survival continued 77 hours 38 minutes. The commander, Captain of the 2nd Rank Igor Britain was the last to leave the ship on October 6, at 11:00am. And at11.03am K-219 sank, carrying in its womb the sailor-hero Sergei Preminin to the depth of nearly four kilometers. The crew and the bodies of three sailors killed on the submarine were delivered to nearby Cuba. Then the staff was brought to Gadzhiyevo, and for nearly a year the crew had been dragged in for questioning to special investigators. The terrible accident was deemed secret, the crew members had to sign a non-disclosure agreement. The Soviet media was silent, despite the highly publicized Gorbachev's glasnost.

Yet, the media across the ocean discussed the disaster. Some sensational details occasionally leaked into the U.S. newspapers. For example, that in the first half of October of 1986 US submarine Augusta, while on patrol in the Atlantic, has been damaged in a collision with an underwater object and arrived at the port of New London (Connecticut) for repairs in a dry dock. It was indicated that the inspection revealed damage to the bow of the hull and the fairing of the hydro acoustic station. To repair the submarine, a strictly limited number of specialists of a private firm was invited.

Official representatives of the U.S. Navy refused to comment on the incident, which is not surprising. American Augusta patrolled the ocean right in the area where the Soviet K-219 was located. But this is almost a complete duplication of the situation with the repair of American submarine Groton after the sinking of the Kursk. Then it went practically unnoticed by the media. Failing Groton barely got to Norway one day after the sinking of the Kursk.

Here is what I heard in the late 1980s from the survivors of the 219. When, after the explosion the ship surfaced and the upper conning-tower hatch was open, Senior Assistant Captain of the 3rd Rank Sergey Vladimirov found along the left side, just above the missile silos and on to the stern, a double furrow, casting metallic luster. It drew the attention of other crew members. Where did it come from?

Fresh tracks on the metal could only be the result of external influence. And it's clear that it was the reason of the accident in the missile silos. The fact that this "external factor" was a foreign submarine is, of course, only a theory. Perhaps the time will reveal documents and facts we currently unaware of, as it often happens.

Any heroic deed has a surprising property: made by a single man, it subsequently ceases to belong to its creator. The deed becomes a national treasure, increasing the spiritual wealth of the people who stand in one row with cultural, scientific and economic values. Let us not shy away from lofty words. We are not used to using them lately. Intentional or unintentional neglect of heroic deeds is not as innocuous as it might seem: it is tantamount to squandering the national wealth. Those who respect their country cannot allow that. Glory to the submariners, both Soviet and Russian!