A defense which deserves being called "holy" 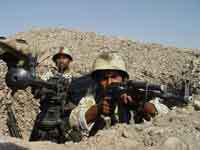 Almost 20 years have passed since the conclusion of 20th century's longest, most erosive war which was brutally imposed on the defenseless people of Iran by a belligerent and aggressive dictator who was finally pushed to death by the same people who had once persuaded, funded, aided and supported him in attacking and invading the new-born Iran of post-revolution days.

The expansionistic ambitions of the beloved puppet of the White House who was granted the honorary citizenship of Detroit as a reward for his unconditional subservience to the United States, transpired to be a deadly pandemic which claimed the lives of more than 400,000 innocent Iranians who witnessed the most breathtaking years the country had experienced contemporarily.

With the intention of revitalizing the forgotten pan-Arabist sentiments of the 1950s, confronting an emerging Shiite power in the Persian Gulf region and taking over some of the strategic parts of Iran including the Arab-speaking province of Khuzestan and the triple islands of Abu Musa, Lesser Tunb and Greater Tunb which were handed over to Iran 9 years earlier in a trilateral agreement between Iran, the protectorate of Ras Al-Khaimah and the representatives of British forces in the Persian Gulf, Saddam Hussein unilaterally nullified the 1975 Algiers Agreement in 1980 and attacked Iran.

At that time, he was enormously supported by the United States and its European allies who had seen the post-revolutionary Iran an ideological threat to their liberal democratic values and feared of the growing embrace of Islam by the international community that was inspired and attracted by the charisma of Iran's revolutionary leader, Imam Khomeini.

Following the victory of 1979 Islamic Revolution which put an end to the era of U.S.-backed monarchy in Iran, White House frantically realized that it had lost its stooge in the Middle East, so it should have replaced Shah Mohammad Reza Pahlavi with an ambitious leader whose greed for power could serve the interests of Washington in the region. Consequently, the United States backed Saddam Hussein in bringing down President Ahmed Hassan al-Bakr, as it had done the same in coup against Abd al-Karim Qasim by entrusting Hussein the mission to assassinate the Iraqi Prime Minister. The assassination plan was designed with the cooperation of the CIA and Egyptian intelligence. Although the 22-year-old Saddam failed to kill the Prime Minister on October 7, 1959, he was killed in a February 1963 Baath Party coup.

In the case of confrontation with Iran, Washington did not spare any effort to support the Iraqi dictator who was armed by the United States to the teeth. In order to strengthen Saddam Hussein in war with Iran which started in 1980, the U.S. State Department first removed the name of Iraq from its list of state sponsors of international terrorism in February 1982.

From this point onward, United States took several steps to normalize its already strained relations with Iraq. One of these steps was pressuring the Export-Import Bank of the United States to provide Iraq with financing, enhancing its credit standing and enabling Baqdad to obtain loans from other international financial institutions.

Although the United States had publicly promulgated that it would take neither sides in the Iran - Iraq war, it was revealed later that Saddam Hussein pulled the first trigger with the direct support and encouragement of the United States. United States officially announced the normalization of its ties with Iraq in November 1984, the fourth year of Iran - Iraq war, while the U.S. had previously begun providing Iraq with military support and intelligence training in accordance with the directives personally issued by President Ronald Reagan, pursuant to his March 1982 National Security Study Memorandum in which a revision of U.S. Middle East policies was sought.

In the summer of 1983, Iran lodged a set of complaints against Iraq to the United Nations, informing the international body of Iraq's employment of chemical weapons against the Iranian civilians in violation of Geneva Convention. Influenced by the United States and its European allies, the United Nations did not heed the calls, but the secret documents of the U.S. Department of State confirmed Iran's allegations against Iraq. Intelligence documents revealed that Iraq had used chemical weapons against Iranian forces and Kurdish insurgents as well.

In a U.S. Department of State Information Memorandum dated November 1, 1983 signed by the United States Navy Admiral addressed to the Secretary of State, it was clearly stated that Iraq used chemical weapons against Iranians: "we also know that Iraq has acquired a Chemical Weapon production capability, primarily from Western firms, including possibly a U.S. foreign subsidiary."

Another U.S. Department of State unclassified document, an Action Memorandum signed by Jonathan T. Howe and Richard W. Murphy, the United States Assistant Secretary of State for Near Eastern and South Asian Affairs, addressed to the Secretary of State Lawrence S. Eagleburger, shows that the two high-ranking U.S. officials demand a serious and immediate action on the side of State Department with regards to the possibility of Iran's complaint being raised in the United Nations and the Security Council. They confirm that some of the European firms are selling Chemical Weapons to Iraq and this issue should be discussed with the European governments: "In October (1983) Iran accused Iraq of using CW and on November 8, it required the UNSYG to investigate. Iran also stated it would soon submit a report providing information and evidence on Iraqi CW use, but has not yet done so. We do not know whether or when this issue will develop further at the UN. It is important to make our approach to the Iraqis on this issue as early as possible, in order to deter further Iraqi use of CW, as well as to avoid unpleasantly surprising Iraq through public positions we may have to take on this issue."

The extent of U.S. support for Iraq during the war was so broad that needs an all-encompassing investigative research to be explained. On May 25, 1994, the U.S. Senate Banking Committee published a report in which it was stated that "pathogenic (disease producing), toxigenic (poisonous), and other biological research materials were exported to Iraq pursuant to application and licensing by the U.S. Department of Commerce."

The Iraqgate scandal revealed that an Atlanta-based branch of Italy's largest bank, Banca Nazionale del Lavoro, which was predominantly reliant on the United States for its funding and budget, transferred over US$ 5 billion to Iraq from 1985 to 1989.

President Reagan assigned Donald Rumsfeld as his special emissary to Saddam and conveyed to him America's willingness and decisiveness in supporting Iraq in war with Iran. In a nutshell, the United States and its cronies all around the world came together to support Saddam and defeat the independent Iran which was defiantly resisting the arrogant powers.

Now, 20 years have gone since those bitter days and Iran is marking the conclusion of 8-year war with Iraq from September 22 for one week. This week is named the Week of Holy Defense in honor of the magnanimous, righteous and praiseworthy resistance of Iranians against a congregation of bullying powers who supported a bullying dictator to dissolve the manifestation of Iranian nation's will. Iranians defended themselves nobly and their moral resistance against the coalition of global tyrants deserves to be called a holy defense.