Colombia: a human rights defender is beaten every 3 days 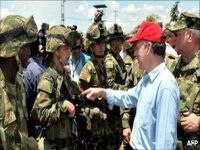 Every three days, a human rights defender in Colombia was the victim of direct aggression in the first half of 2010. The information is from the Information System Attacks the Defenders of Human Rights (SIADDHH), which monitors violence against defenders and human rights organizations in the country.

According to the report, 64 Colombian defenders were victims of assaults during the months of January and June this year. The number of attacks increased over the previous six months (June-December 2009), when it recorded 38 cases.

In addition, 111 social and human rights organizations have suffered some kind of aggression that endangers the life and integrity of its members and undermines its legitimate and legal work.

Threats, attacks and assassinations were the three identified attacks. Of the 64 cases recorded in the first half, six are related to attacks on life, seven correspond to homicide or murder and 51 threats against defenders.

In the context of assaults, May and June were the most critical months, when there were seven murders. The report draws attention to the proximity of the deaths with the presidential election. "Historically in the country during the electoral process, the incidence of political violence and human rights violations increases."

Most of the attacks came from paramilitary groups, with 59%, against 41% that were not unidentified. The report also highlights an increase in the number of assaults by unknown actors in comparison to previous periods. In the latter half of 2009, this rate was 26%. "There is an increasingly clear tendency towards the ignorance and depoliticization of the perpetrator of these assaults, according to official sources, conforming to common crime and not the legal and illegal armed actors in armed conflict and political violence that affront Colombia."

The data also shows that the most dangerous area for the exercise of human rights remains the city of Bogota (28%), having the greatest number of assaults. Then there are the regions of Santander (16%), Cauca (17%) and Valle. The report also highlights the situation of the regions of Meta and Huila, with a considerable growth in assaults.

The report also criticizes the country's authorities, who have not submitted satisfactory conclusions about the attacks. "Despite the growth of threats and intimidation of human rights defenders and the resulting criminal charges held in the Attorney General's Office [prosecutor's] office and the competent authorities, added to previous years, there are some results on the origin and responsibilities for said aggression," the statement said.
(with information from the We are Defenders Program)

Ed. Note: 800 soldiers to get one guy, sounds very democratic and just