One nation under God?

What does the American First Amendment mean in regards to Christianity?

"Congress shall make no law respecting an establishment of religion,or prohibiting the free exercise thereof; or abridging the freedom of speech, or of the press; or the right of the people peaceably to assemble, and to petition the Government for a redress of grievances." 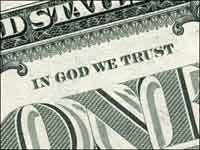 If you ask the ACLU, liberal, Democrat, or Atheist they will tell you that it means anything religious must not be seen or heard.

When I was waiting for my wife at the DMV, there were 4 young men standing outside. A gang you say? The usual ne'er-do-wells on public streets? Well, not this time. They were preaching Christianity. They explained they had a permit to do so. I thought the young people waiting in line to get in the DMV might say something rude to them. Perhaps throw stuff or shout an insult. Well, not this time.

An old man ran as fast as he could to these rabble rousing 4. He got in their face and yelled at the top of his lungs, "THIS IS NO PLACE FOR YOU!!! KEEP YOUR RELIGION AT CHURCH!!!. The one young man he addressed so politely was so serene that it made the old man's voice tremble . Was the old man a member of the ACLU, liberal, Democrat, Atheist or just possessed? The words of Christ made him tremble. Why do you think? Was he afraid of the truth?

Truthfully, the First Amendment means as Ronald Reagan once said, "When our Founding Fathers passed the First Amendment, they sought to protect churches from government interference. They never intended to construct a wall of hostility between government and the concept of religious belief itself." It has always been so. Reagan even asked Congress to proclaim 1983 as "Year of the Bible". It was passed by Congress and approved on October 4, 1982. The media and the ACLU hated Reagan for that.

I am not stating that America has no flaws. All countries do. The Founding Fathers of America clearly had a strong faith and with it, a triumph over adversity and a willingness to thank God for overcoming that adversity. Faith and success walk hand in hand. Those without faith find only chaos. After Reagan, America has only chaos. He had warned America, "If we ever forget that we are One Nation Under God, then we will be a nation gone under." At least half of America did. Pleasure seekers. Entertainment is their God.

The Founding Fathers of America had a strong faith. This is no longer taught in "public" schools. The ACLU would file a lawsuit before sundown that day if it was mentioned. They are also afraid of the truth. There are many documents supporting the fact that our Founding Fathers were Christians. Also, other presidents in recent history share the same strong faith. Here are some of my favorite quotes. BTW, If you have a good presidential quote exemplifying their faith in God let me know.

"It is impossible to rightly govern the world without God and the Bible".
- George Washington

"Our Constitution was made only for a moral and religious people. It is wholly inadequate to the government of any other."
- John Adams

"I am a real Christian, that is to say, a disciple of the doctrines of Jesus."
- Thomas Jefferson

"In the beginning of the contest with Britain, when we were sensible of danger, we had daily prayers in this room for Divine protection. Our prayers, Sir, were heard, and they were graciously answered... do we imagine we no longer need His assistance?" - Benjamin Franklin

Those were just a few quotes. If you would like to see more, you can watch this video