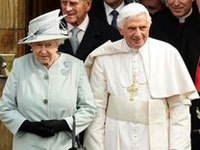 The highly successful visit of Pope Benedict XVI to the United Kingdom is a reinforcement of the triumph of religious tolerance over centuries of injustice in a country where History tried to denigrate the image of Catholicism, where History failed to remind us that there are more Catholic than Protestant martyrs buried under its soil and where History ended up with the via media which is the Anglican Church of today, coexisting with the Roman Catholic Church in a spirit of mutual tolerance.

The Papal visit to the UK terminated on Sunday at Cofton Park in Birmingham with the mass to celebrate the beatification of Cardinal John Henry Newman, who started his life as an Anglican and converted to the Roman Catholic Church, the embodiment of what unified the churches and a victory over the dark forces manifested by human intolerance, which divided them.

Russia Today: Vatican asking: Why the Pope and why now?

The tremendously warm welcome extended by the people of Britain to His Holiness Pope Benedict XVI represents a triumph over the troubled period of repression from members of both churches, which created so many martyrs. The history book speaks of Bloody Mary, invoking the murder of Protestants during the reign of Mary I (1553-1558) but glosses over the fact that more Catholics were murdered by Protestants during the reign of Elizabeth I. Where is the reference to Bloody Elizabeth?

However it was during the reign of Elizabeth I (1558-1603) that the via media constituting the base of the Anglican Church was forged.

The luv-n-lust story goes that love-struck Henry VIII wanted to get married to English belle Anne Boleyn and broke with Rome because the Pope would not let him divorce Catherine of Aragon. The wider picture reminds us that to divorce Catherine was impossible under Canon (Church) Law, the more so because he had received a special dispensation to marry the widow of his elder brother, Arthur, from Pope Julius II. How could he now expect to receive permission for a divorce from Pope Clement VII? The wider picture demonstrates that the history book has ignored the fundamental pressing need felt by Henry VIII, as was the case with all kings, to secure a (Tudor) Dynasty.

The wider picture also shows us that at the time, Henry VIII's royal treasury was practically bankrupt and by breaking with Rome, not only could Henry keep the payment of the tithe (a third of his income) for himself but also could seize the tremendous wealth from the monasteries, which he promptly did (1533 to 1536).

The wider picture informs us, tellingly, that the early Church of England was based upon the precept of authority to the Prince. Yet Henry VIII himself died a Catholic, albeit an excommunicated one. The Protestant and Reformist movement which sprang up on the European Continent around the figures of Martin Luther before 1520 and Jean Calvin in the 1530s, was based upon popular repugnance at the endemic corruption in the Roman Church (selling of indulgences), the enormous wealth and opulence in which its members lived (the Catholic Church was the largest landowner in Europe with around half the lands in some countries) and the popularity of the precept of sola scriptura, under which the power to dictate religion was wrested from the Church through the printing of the Bible in the vernacular, so that people could read for themselves what the scriptures said. Protestantism was Power to the People.

When Henry VIII died in 1547, the pendulum swung back and forth during the reigns of his three children. During that of his son by Jane Seymour, Edward VI (1547-1553) the Reformists started to take hold among the growing mercantile class in the cities. The movement was cut short by Edward's precocious death at the age of 16, possibly due to tuberculosis, possibly after measles and then smallpox destroyed his immune system in 1552, leaving him open to an opportunistic infection of acute bronchopneumonia the following year, resulting in septicaemia and renal arrest.

The next in line to the succession was Mary I (1553-1558), Henry VIII's first-born daughter, the only surviving child from his marriage to Catherine of Aragon. During the reign of Mary (initially popular) and her husband, Phillip II of Spain (hugely unpopular), the pendulum swung back towards Catholicism and the Protestant and Reformist movement was stalled, rather than crushed. After Mary I's death in 1558, possibly due to a tumor on the pituitary gland, her half-sister (daughter of Henry VIII and his second wife Anne Boleyn) Elizabeth I, became the last Tudor monarch.

More Catholics perished under her reign than Protestants under Mary, however it was during the reign of Elizabeth I (1558-1603) that the via media constituting the base of the Anglican Church was forged, practically doing a reset of Church doctrine back to the times of Henry VIII.

While the pendulum continued to swing over the following four centuries, the base supporting the two churches in the UK was formed and the visit of His Holiness this week is a victory over those who on both sides sought to reinforce their supremacy at the cost of others, and wholly against the teachings of the Scriptures.

Anglicanism and Catholicism in the UK

While there are more Anglican Christenings than Catholic Baptisms, there are more Catholic church-goers in the UK than Anglicans, whose church is more community-based than centrally governed, although the Primate, the Archbishop of Canterbury, is the spiritual figurehead while the British Monarch (Queen Elizabeth II) is the Supreme Governor, the secular Head.

The Anglican via media forged in the time of Elizabeth I formed the basis for an infusion of traditions from pre-Reformation times, embracing the less radical lores and customs of Protestantism, embodied in the 39 scripture-based Articles of Faith drawn up in 1563, the foundation of the Anglican Church. It is one in which the congregation shapes the method of worship, be it clap-happy services among younger communities, a more evangelical approach among congregations with a large number of Afro-Caribbeans or High Church services in more traditional areas with an older and more conservative population.

The 37 million Anglicans and 5 million Roman Catholics in the UK share the same basic Christian beliefs; the Creed, after all, is identical, including "Credo in Spiritum Sanctum,
sanctam Ecclesiam catholicam, sanctorum communionem, remissionem peccatorum, carnis resurrectionem, vitam aeternam" (I believe in the Holy Ghost, the Holy Catholic Church, the Communion of Saints, the forgiveness of sins, the resurrection of the body, eternal life).

It is here, in the Communion of Saints, where we find one of the main differences in doctrine, for the Anglican Church does not believe in the power of intervention of the Saints, which includes the Virgin Mary, therefore there is no equivalent for the Ave Maria, nor are there prayers to saints, nor are they venerated in chapels. The second main difference is that the Anglicans do not believe in the transubstantiation of the bread and the wine into the body and blood, soul and divinity of Christ, this being merely symbolic and without undergoing a transition at the act of elevation.

In terms of discipline, Anglican priests can marry and women can become priests if the community so wishes. In the Roman Catholic Church, only those who are ordained as Catholic priests can offer the Sacrifice of the Mass, confect the Holy Eucharist and grant absolution through sacramental Confession.

Due to the fact that the Anglican Church does not have the same doctrinal unity as the Roman Catholic Church, it has several branches overseas, the Anglican Communion being represented in the Episcopalian Church and in several other churches in North America which determine themselves as Anglican.

A growing number of conversions to Catholicism among Anglicans represents the dislike of changing traditions in certain geographical regions and ultimately, this inability to define itself clearly may very well be the underlying cause of a formal reunion with Rome, for although the Anglican Church labels itself as "a Catholic (Universal) Church", the Roman Church declares clearly that it is "the Catholic Church".

Child Abuse and Repentance: The importance of the Papal visit

Pope Benedict XVI took care to address the issue of child abuse within the Roman Catholic Church, using the phrase "all of us" in his address at Westminster Cathedral in accepting the collective failing of the Church as an Institution and not just that of the perpetrators of these horrific crimes, hiding behind the skirts of the priesthood to commit their sins against the defenceless. Secondly, he referred to sexual abuse as a "crime" and not just a "sin" which is an indication that Church members cannot hide behind Church Law for this disgusting and unacceptable practice to be dealt with internally.

Asking the people of Britain "What sort of society do you want to be?" the message of Pope Benedict XVI is that people have the ability to choose and determine who and what they are collectively and individually, not necessarily within the Roman Catholic Church but also alongside it.

These messages, and the beatification of Cardinal John Henry Newman, who started his life as an Anglican and converted to the Roman Catholic Church, the embodiment of what unified the churches and a victory over the dark forces manifested by human intolerance, which divided them, is also a victory for humanity over the past excesses, crimes and horrors of the different vectors of Christianity.

At a time when Christianity and Islam are finding themselves drawn in to the geo-political vectors of international relations, and their complexities, the visit of Pope Benedict XVI and its consequences could not have been more timely. Now we shall see whether the international media is up to the task of divulging the potential of this pastoral, ecumenical and State visit.