The Bank of Kabul and corruption in Afghanistan 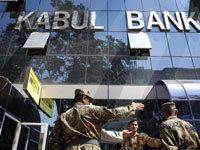 The Afghan government has announced it will launch a financial rescue operation of the Bank of Kabul, the largest commercial bank in the country, which these days is mired in a serious crisis that threatens to overwhelm the country's fragile financial system. The Central Bank of Afghanistan plans to spend $200 million for the operation, a huge amount of money for a state that does not levy more than 1200 million dollars in taxes each year. The crisis is accompanied by a scandal involving large-scale corruption that involves the brother of Hamid Karzai, President of the country.

At the end of last month, the Central Bank was compelled to seek the resignation of the two main directors of the Bank of Kabul, Khalilullah Frozi Sherkhan Farnood, after discovering that losses had reached 300 million dollars and shareholders' money had been used for illicit investments. Sherkhan Farnood, founder and president of the bank, as well as a professional poker player, had used bank money to cover losses from his private airline, Pamir Airways, and to invest in the Dubai real estate market until it collapsed in 2008.

In addition, Farnood bought properties in Dubai with bank money from some of the most powerful persons in the country, including Mahmood Karzai, the brother of the president who holds 7 percent of the shares of the bank. In 2007, Karzai asked for a bank loan to buy from Farnood a luxury home on Palm Island in Dubai. Karzai sold the property the following year, earning a profit of over $800,000.

After the scandal broke, many of the 1.4 million customers of the Bank of Kabul rushed to withdraw their savings, leaving the bank with a serious liquidity problem. Meanwhile, Hamid Karzai was trying to calm the situation by ensuring that the Afghan Central Bank is perfectly capable of dealing with the situation and, in turn, the U.S. government sent a group of advisers from the Treasury Department, but refused to provide money for the rescue operation.

Although the presence of the banking sector in Afghanistan is rather scarce (according to the U.S. government less than 5 percent of Afghans have a bank account), a collapse of the Bank of Kabul could have unpredictable consequences for the course of the war, since it would greatly weaken the already fragile Afghan state apparatus, as thousands of civil servants and military officers are being paid through that entity. The crisis has already led to situations like the one that occurred last Wednesday when security forces attacked a group of five hundred officers who came to the bank's headquarters in the capital to withdraw their savings. All this in a time when the insurgency is gaining ground and Karzai's government is more discredited than ever.

The Bank of Kabul, an entity created five years ago, has benefited greatly from the climate of corruption and prevailing impunity in Afghanistan. The main sponsors of the campaign of Hamid Karzai last year were the bank executives with the political elite in Kabul. He won thanks to a widespread electoral fraud that the "electoral community" decided to totally ignore.

The financing of the Bank of Kabul is nothing strange considering that two of the main shareholders, Haseen Mahmood Karzai and Fahim, are brothers, respectively, of President and Vice President (General Mohammad Fahim Hasim, a master of war from organizations linked to criminal organizations and arms traffickers and charged with war crimes).

The Afghan government is one of the most corrupt in the world, but there is no doubt that members of the economic and political elite in Kabul are not the only culprits. They are no less responsible for those contracts awarded to all local and foreign businessmen, putting in power a few warlords and politicians with blood on their hands and giving them billions of dollars without really worrying about where the money goes. Even the Center for Strategic and International Studies, a Washington think tank, a bit suspicious of any type of radicalism, has recently acknowledged this in a report with the eloquent title "How the United States has corrupted Afghanistan."

The project of "nation building" in Afghanistan waged by the so-called international community has not only has turned out to be extremely beneficial for the Afghan elites Karzai, Fahim, Farnood and company, but also an army of contractors, Afghan and foreign consultants and nongovernmental organizations around the world. According to a report published by Oxfam in 2008 [pdf], 40 percent of international aid returns back to their countries of origin in the form of wages and corporate profits. Profit margins of contractors, Afghan and foreign, can reach as much as 50 percent.

That "nation building" carried out during the past nine years is only serving to build and enrich a small inbred elite that although there has been minimal building of a viable state in Afghanistan, is managing to introduce the most fierce capitalism in the country, and is leading to its ultimate and most self-destructive consequences.