Mapuche on hunger strike are entering into critical state 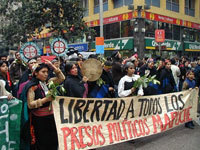 There is still no concrete answer to the demands of the Mapuche population in Chile. Therefore, 32 political prisoners from this ethnic group are holding a hunger strike that has lasted 52 days. According to a medical report released recently, in the coming days the Indians could enter into a critical and vital risk.

Three strikers were already taken to the hospital with ill-health due to having ingested only liquids. Among them, Felipe and Mauricio Huenchullan Huaiquilao, were taken to emergency medical assistance because they are in life-threatening circumstances. The Mapuche have lost between 15 and 18 pounds since July 12.

"[The strikers] have entered a critical stage, in which they will probably lose more muscle tissue and perhaps in the next few days the organs, such as the liver, kidney and heart are starting to weaken," María Tralcal, spokesman for the strikers' families, told Radio Cooperativa.

The families also expressed though Tralcal that they are still concerned about the health of the strikers, but "also understand that the brothers made a decision and their attitude was always arriving up to the last consequences."

In an attempt to get the attention of the Chilean government, three Mapuche minors imprisoned in the special center of Chol Chol, joined the hunger strike. Louis Marileo Cariqueo, Cayupan Cristian Morales and Jose Perez Ñiripil justified their joining by stating that so far the government's responses were zero for all Mapuche demands. The young people also complain that they are not recognized as political prisoners.

Moreover, there is still the intention of denouncing the irregularities in the detention center for minors, ranging from abuse, up to the restriction of visits and a ban on entry of healthy food such as bread, meat and fruits, while allowing them only to receive sweets, chips and soft drinks.

Given this, the interior minister, Rodrigo Hinzpeter, called on the Mapuche prisoners to terminate the strike and announced the sending of two bills seeking to reform the 'anti-terrorism' law. The intention of the minister was well accepted by the Mapuche leader Jose Nain, who said the Mapuche expect this to be done as soon as possible so that the strikers' health is not weakened further.

Already the attitude of the Chilean president, Sebastián Piñera, was the refusal of negotiations and dialogue with the Mapuche prisoners. Still, the president pledged to change the 'Anti-Terrorism Act' and the code of military justice. So far, the political prisoners are following and awaiting concrete answers to their demands.

The strike began on July 12, in the Temuco and Concepcion prisons and were joined by the Mapuche political prisoners in Angol, Valdivia and Lebu. The focus of the claims is the end of the so called 'anti-terror law', which deals with the Mapuche prisoners as "dangerous enemies of society,' reverses the presumption of innocence to keep suspects detained without evidence, accepts secret investigation, accepts 'faceless witnesses' and triples the penalties, which may range from 60 to 103 years.

Also the Mapuche want the demilitarization of their communities, the end of dual processes in civil and military justice and freedom for all Mapuche political prisoners.

Translated from the Portuguese version by:
Lisa Karpova
Pravda.Ru