US hawks hover above Sudan 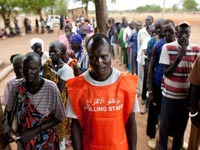 A few months prior to the Sudan Referendum on self-determination of the south of the country, Washington has been showing an increased diplomatic activity in this process. The U.S. actively supported the idea of holding the referendum on time, at the beginning of January 2011. At the referendum the southerners have to decide whether to remain with the North as a part of a single state.

Washington is very interested in splitting this large Muslim country of the African continent into two parts to prevent it from becoming al-Qaeda's base.

Russia Today: Why the Sudanese don't take the West seriously

The American intelligence agency believes that the authorities in Khartoum maintain informal contact with the terrorist organization. This (according to Washington) puts Sudan on a par with Somalia and some other African nations where al-Qaeda has its bases. In the case of separation of the South from the North as a result of the referendum, the U.S. could establish its military base there, note Sudanese media.

A few years ago, the central government of Sudan tried to forcibly Islamicize southern areas of the country, whose population does not speak Arabic and are not Muslim. The government's attempts in Khartoum to extend Sharia law throughout the country have led to civil war.

The end of a protracted civil war between north and south was put by the Comprehensive Peace Agreement of 2005. According to this document, for six years, until the end of 2010, Sudan will be in a "transitional period" and then would hold a referendum on self-determination of the south.

However, six months before the referendum, in early June, the U.S. authorities officially informed the southern Sudan, that they were ready to recognize the new state in the event of Southerners' decision to secede from the north. The message was articulated by the Secretary General of the leading political force in southern Sudan, Sudan People's Liberation Movement (SPLM), Pagan Amum.

The American administration is ready to accept and recognize the choice of Southerners. If they speak for the secession of the north, the U.S. will recognize the new state, Amum said. Pagan Amum participated in the talks with U.S. Vice President Joseph Biden and head of the Government of Southern Sudan Salva Kiir in the Kenyan capital Nairobi. He also said that Kiir and Biden agreed that the remaining time before the referendum is not enough to make life in the united country look attractive to the Southerners.

The U.S. promised to provide technical and financial support to southern Sudan and the election commission and to help it conduct a transparent referendum, which would reflect the will of the people of the south, said Amum.

For these purposes, the U.S. allocates 60 million dollars, said U.S. Consul General in Juba, Ava Rogers. According to her, financial assistance will be provided through the U.S. Agency for International Development, as well as U.S. independent agencies. She also stressed the need to respect the designated dates for the referendum in southern Sudan.

Meanwhile, the central authorities in Khartoum are showing less interest in holding a referendum on the secession of the south. Sudanese President Omar al-Bashir, although had promised to accept any outcome of the plebiscite, however, warned of the negative consequences of the collapse of the country.

In turn, the Referendum Commission appealed to the Sudanese government and the cabinet of the south with the requirement to defer the vote scheduled on January 9, 2011, told the representative of the Sudanese National Congress party, Ibrahim Ghandour.

The Government is currently reviewing the Commission's proposal to postpone the referendum, said Ghandour. He did not specify how long the commission wants to postpone the vote for. The capital of southern Sudan Juba negatively perceived attempts of Khartoum to postpone the referendum. The leader of the SPLM Pagan Amum sharply criticized the commission's work, saying that it is currently paralyzed."One of the obstacles in its work is the lack of agreement on the candidacy of Secretary General of the Commission.

In addition, by law, the commission must establish the final voter lists three months prior to the referendum - by 9 October 2010. However, its employees have not started compiling these lists yet. As of yet, it was impossible to start work in determining the exact borders between northern and southern Sudan, without which the referendum is impossible.

However, Amum said to television channel Al-Jazeera that Southerners will never agree to the postponement of the referendum.

Obama's envoy's trip to southern Sudan four months before the referendum shows that the United States is enthusiastic to support the position of the Sudan People's Liberation Movement at the diplomatic level. That confirms once again that a referendum on self-determination of southern Sudan opens the way for the emergence of a new pro-American state in the heart of Africa.