"Russian tourists" is a phrase that makes many shudder. Rightfully or not, but Russians earned a reputation of rude alcoholics who like to splurge but have no knowledge of basic etiquette. A German citizen who requested his money back after his vacation was “ruined” by Russians in Turkey added more fuel to the fire. 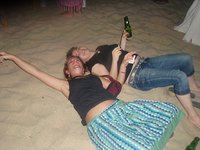 A funny but sad incident was made public the other day. A German tourist came back from his vacation in Turkey and filed a claim in a court demanding a part of his money back.

The tourist paid 589 Euros for all-inclusive vacation widely popular among Russians and was placed in a hotel filled with Russians by 80%. These Russians caused the tourist much frustration. He said that they ruined his vacation by being “rude” and “unbearable.” The Dusseldorf judge was not convinced and declined the claim.

It is not so much about this particular unlucky German, but about the fact that for many the phrase “Russian tourists” sounds like something horrible and extremely indecent. Everyone knows that certain travel agencies sell special packages for resorts with no Russians present. Not that many know that the buyers of these packages are mainly Russians. It turns out Russians are ashamed of themselves.

Of course, we can say that the bad fame of “always drunk Russians” is a gross exaggeration. Yet, from time to time Russians show themselves in not so favorable light. A good example is a recent video published on-line showing a Russian female in Turkey or Egypt causing an ugly scandal over slow service. While this nice looking lady was cursing a bartender, the crowd was happy to encourage her.

Last year an opinion poll was conducted among Europeans where the participants said the Russian tourists did a lot of harm to others. Russians frustrate other tourists when they bring beach chairs to their rooms to guarantee they have them next day or pack food into their bags at buffets.

They behave extremely rude, speak loudly, and are generally unpleasant. Additionally, they flash their money trying to demonstrate to everyone how wealthy they are.

Interestingly enough, the last characteristic is appreciated in the Crimea. Local hotel owners say that while Russians drink and damage everything, they pay for this damage in full. “When Russians are having fun they want everyone around to have fun. Waiters get ridiculously large tips. Usually after too much food and alcohol Russians fight. Normally it is not only people who suffer but hotel assets as well. Furniture, TVs and glass get crashed. Next morning guests move to another room, pay for the damages and continue their vacation,” local hotel owners said.