They Fought for Our Homeland

Going on 65 years since the end of World War II, the Great Patriotic War as the Russians call it, several questions should be asked by historians. One concerns the role of women in the resistance to Nazi occupation of the Soviet homeland. In the West, because of the political manipulations of the culture industry, which publishes and distributes scientific and artistic productions on the War, the Russian effort to halt barbaric Nazi fascism is avoided, the role of women in all sectors of resistance is not even cited. 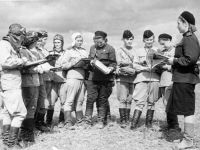 They Fought for Our Homeland

In fact there is a campaign almost everyday in certain political and economic sectors of the West, whose media conglomerates are trying to build a smaller view of the Soviet war effort, the collective imagination of society. Explicit reference can be made to the television stations History Channel and Discovery Channel, whose historic war building imagery is completely distorted by a narrative that is still contaminated by the demonization of the USSR, from the intelligence agencies of countries comprising NATO, with close relationship to traditional media and universities in the U.S.

Currently there are mechanisms circumventing this cultural domination, and have access through the Web, to historical documents produced in the USSR during the war. The fog which prevented a more heterogeneous view of the greatest conflict of the twentieth century is slowly being dissipated.

Films like: She Fought For the Motherland (1943), Rainbow (1944), The Auroras are born Gentle (1972), emphasize the participation of Russian women to defend their country. These films, especially the first two, held during the war, provide the viewer a construction of the narrative on the situation of women in war, as well as everyday life on the front and in the rear. These first two films were made under the influence and aesthetics of socialist realism. They have a strength in documentary imagery, in terms of the specificity of women in fighting the Germans.

One of the remarkable elements in these films is the dual role of women in combat directly against the Wehrmacht and SS and assisting children who were often killed by the occupying forces.

In Raduga and She fought for the Motherland, infanticide of Soviet children, committed through Operation Barbarossa, in the territories occupied by Hitler's army was filmed in detail, noting even reports of some Soviet war correspondents as Vassily Groosman. By building analytical bridges between the Groosman reports and construction of these two narrative films, similarities are evident.

Although these two films show aspects of the micro-history of the war, focusing on particular aspects, they can relate them to wider structures related to the conflict, in particular the policy of extermination of the Soviet people waged by the Germans during the occupation. Groosman also relates a broader structural perspective with the particular situations of individuals living in the occupied territories, as well as those who were forced to move to keep from being exterminated by the Nazi mad fury.

The contemporaneity to be understood in its multiple facets requires that a historiographical contribution should be as broad as possible. As the world situation is often defined by the forums of international decision created from the end of WWII, the current geopolitical configurations still retain structural elements from the consequences of the Great Patriotic War.

Soon, these Soviet films that currently circulate on the Web, and can be accessed by the West, will play the role of revealing the Soviet interpretation of the conflict, which will spread in Western society after having been censored by traditional media.