Russians again discussed Stalin’s role in the national history in connection with the 130th anniversary of his birthday. Pravda.Ru reported earlier of the Moscow government’s intention to install Stalin billboards in the city streets within the scope of celebrations of the 65th anniversary of Victory in the Great Patriotic War. 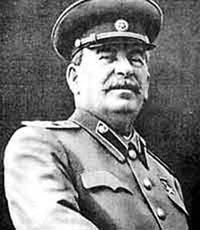 Moscow Mayor Yury Luzhkov said that it would be inadmissible to strike Stalin’s name out from the history of the nation’s victory over fascism.

“We will do it proportionally; we are not going to put up his billboards and posters all over Moscow, like the media said,” Luzhkov said.

“Yury Luzhkov should rethink his decision. He is not a historian, he is the head of the city,” Gryzlov said.

According to Gryzlov, it goes about the political, rather than the historical estimation of Stalin’s role.

“This estimation cannot be positive. As for the moral sense of the issue – there is not much to argue here: Stalin is guilty of the deaths of millions of people. Not all pictures that can be found in Russian textbooks on history can decorate the streets and the squares of our cities,” the official said.

An official spokesman for the Moscow government said that Luzhkov’s statement and views were misinterpreted.

“The mayor repeatedly said that he was not a Stalinist. The Moscow government did not plan to promote the image of this political figure and even refused from the initiative,” an official said.

Other regions of Russia followed Moscow’s example. War veterans and communists supported the idea to use the image of Stalin within the scope of victory day celebrations. They sent an official note to the mayor of Barnaul with a request to include his images in festive decorations of the city.

Communists of St. Petersburg also told reporters of their plans to print up to 1,000 posters of Stalin and plaster them in the center of the city before May 9.

Stalin is like a litmus paper that reveals sentiments of the Russian society. If something in the country goes wrong, his authority grows. If everything is fine, people do not think about the “chief of the nations.”

It is easy to understand the veterans, who died in fierce battles for Motherland and Stalin. Stalin is their wartime glory. However, there are young people in Russia who defend Stalin too. Their Stalinism is much more dangerous. They defend Stalin’s way of Russia’s development: dictatorship and the totalitarian empire, where everything is subordinated to the interests of the Chief.

Some of them say that denying Stalin is equal to denying the USSR’s Victory in the war. They substitute different notions here. If a person condemns Stalinism, it does not mean that he or she blackens Victory. The Soviet nation paid a huge price – millions of lives – for Stalin’s mistakes, especially during the beginning of the war. At the same time, Stalin’s contribution in the Victory is undisputable, although it is unfair to consider him the most important person at this point.

Regular scandals connected with Stalin’s name testify to a split in the society, which does not see one single way for its development. Only naive Stalinists believe that Stalin means law and order in everything.

Russia Today: Stalin will return to Moscow on Victory Day