The Moscow government has recently surprised many Russians with news about the plans to plaster images of Joseph Stalin in Moscow to celebrate the 65th anniversary of victory in the Great Patriotic War. 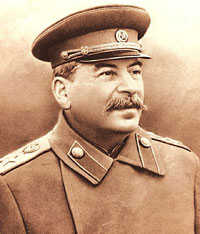 “The stands will contain information about the role of the Soviet Commander-in-Chief during the years of the war. The billboards will be prepared by April 15,” an official with the Moscow Committee for Advertising said.

The stands will be put up at the locations where public festivities will take place, Pravda.Ru reports.

Officials said that the project had been prepared on requests from veteran organizations.

“We have never submitted any requests like that. I would not mind such placards, though. It’s a good idea – to tell of Stalin’s role in the war,” Vladimir Dolgikh, the chairman of the Moscow Council of War Veterans said.

The posters have not been prepared yet, but the scandal is gathering pace already.

“Public advertising with the glorification of Stalin is inadmissible,” Lev Ponomarev, the leader of “For Human Rights” movement said.

State Duma speaker Boris Gryzlov also set out his views regarding the subject:

“Looking back at the results of the Great Patriotic War, one may say that it’s not Stalin but the people who won the war. One has to speak about the role of the whole nation, the role of the veterans. In general, placards will not correct Stalin’s role in the life of our country,” the official said.

Mark Zakharov, a prominent Russian film director, believes that the idea to remind people of Stalin’s role in the war is silly.

“Let’s plaster the portraits of Lavrentiy Beria and remind everyone of his role too!” he said.