In the end of 2009, statisticians, psychologists and sociologists derived a portrait of a contemporary Muscovite, reports The Rossiiskaya Gazeta. The image of an average Muscovite looks like this: tall, with long limbs, early bolding 39-year-old man who has sex twice a week. 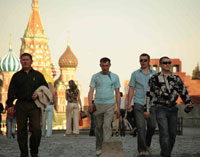 After hitting 41, women start gaining weight and grow on average two sizes bigger. Muscovites are nearsighted; they suffer from depression, gets sick often and risk their lives more than any other Russians. All this does not prevent them from living on average four years longer than other Russians.

According to the Institute for Anthropology, in the beginning of the 21st century an average Muscovite was 5.7’’tall, which is four inches taller than other average Russians. Within the last 30 years Muscovites grew 2 inches. Scientists predict that the average height will increase to 5.9’’. After tha,t the height will start decreasing in compliance with the law of evolution.

The average weight is 165 pounds. The average head size is 22.25’’. An average male’s skull gets longer every year.

Anthropologists also observe that Muscovites’ body proportions change as well. They grow because legs are getting longer. Arms are also getting longer, feet grow and shoulders are widening. Anthropologists believe that the growth is caused by ample protein food. The more protein people consume, the longer they get.

Body proportions of an average female are far from perfect. In the middle of the last century she wore size six while now she wears size 8.

Muscovites are bolding 4.2% faster than other Russians. The reasons are smog and warm humid climate . The same reasons cause allergy among one third of Muscovites.

Blood types of average Muscovites are A (Rh+) and B (Rh+).

Most Muscovites are nearsighted. Cavities are another issue. By age 30, an average Muscovite has only 26.4 healthy teeth.

Muscovites’ sex life is not worth bragging about since an average married man has sex 2.6 times a week. Yet, it is still better than anywhere else in Russian where people have sex 2.3 times a week.

Currently, an average male Muscovite is 39 and female is 41. Within the last 20 years, the average age of Muscovites increased by five years. An average Muscovites is one of the oldest in Russia. Scientists say that Moscow is becoming a city of old people.

Muscovites have good nutrition. Last year, each Muscovite ate on average 187 pounds of meat, and 22 pounds of fish, which is close to the norm. Each Muscovite consumed approximately 220 pounds of vegetables (instead of 321 pounds), and 174 pounds of fruit and berries (185 pounds are recommended). An average Muscovite also likes chocolate, juices, and milk.