Courchevel residents (a ski resort in French Alps) were well prepared for the inflow of wealthy Russians who drive no less than a Maserati. Local boutiques were filled with chinchilla coats priced at €120,000 per item. Waiters were looking forward to generous tips that normally account for six months of their family budgets. Taxi drivers were ready to announce a minimum price of €100 per ride. 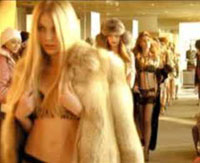 But the one-time splurge was gone. The financial crisis is not the one to blame. This year, it is not safe for the Russians to be seen in Courchevel, especially for officials and top managers. Heads of many companies and departments warned their employees that they would be fired if pictures showing them in Courchevel leaked into press.

Guests in local restaurants think of those who got off the ski track by someone else’s will and lost their status thanks to a bold picture in a newspaper with the French Alps in the background. That what has happened to the former CEO of the National Reserve Corporation Anatoly Danilitsky. In January of 2009, Anatoly had fun in Courchevel, and in February, by the decision of the shareholders meeting, he was released from his position at his own will.

Many officials and top managers made their conclusions and did not come to Courchevel this year preferring less popular resorts like Mezhev and Shamoni. Those who did come to Courchevel tried to spend the “Russian season” at the most expensive resort in the French Alps quietly, surrounded by their family members. They were hiding in rented chalets worth 40-50 thousand Euros a week and killed time playing the popular Mafia game.

The crisis of the last year in some ways corrected mad ambitions of the wealthy, but in a very peculiar way.

“Times when wealthy public partied on grand scale and splurged are long gone,” says Dmitry Fyodorov, a famous promoter who organized many private parties in Courchevel this year. He himself has been visiting the resort for 12 years.

There are no grand concerts on the central square and no one invites Sir Elton John to sing any more. Now they invite Toto Cutugno to sing in their chalets instead of the square.”

This year, even the most harmless tournament called “Millionaires’ Cup” held every year at Courchevel’s slalom stadium was cancelled. The tournament had different categories for men, women, and children. In the past, kids of a businessman Vladimir Potanin, Ivan and Anastasia, received prizes here.

The slogan of the last year’s tournament was “Beyond the crisis!” The guests were generously treated with crepes and caviar and mulled wine. This year, there was no tournament or caviar.

Having saved the money on fireworks and tournaments, Russians started to buy furs. Every fifth female “skier” walked around Courchevel dressed in expensive, but identical chinchilla coats. Salespeople of the central boutique Miledy were enjoying outrageous chinchilla sales. Lynx coats (90 thousand Euros each) were not that popular, and only three of them were sold this season.

Russians celebrated the New Years in Courchevel night club Les Cave. The tables for the Christmas party were 10 to 35 thousand Euros and should have been reserved six months in advance. Getting a table here is a matter of honor. This is the same club where Lyon police arrested Michael Prokhorov in 2007 and kept him in jail for four days on a suspicion of pimping.

This year, Prokhorov never appeared in Courchevel. The rumor has it, he was spending time at Cote d'-Azur, while others swear he was seen at Saint-Moritz. Right before the New Years France officially apologized, and everyone was convinced that it was almost an invitation for the oligarch to visit this sweet resort.

Both models and prostitutes from all over the world come here to pursue the wallets of the Russian tycoons.

“There were quite a few Romanian prostitutes this year. The Russians even gave them a nickname – Dracula’s descendants. You don’t see these girls in the day light,” commented a local resident.

Romanian ladies had no idea that the traditions in Courchevel are changing and in January businessmen come exclusively with their wives. In March they usually come to the Alps with their mistresses or meet local nymphs at the resort.

They also say that the Albanians were noticed in Courchevel.

“Many of my friends complain about it, “says one of the regulars. “There is an entire group of them working under a system designed in Saint Tropez. The scheme is thought out to the last detail. For example, 5 to 6 maids working in the hotel are sent by Albanians. Each of them receives detailed instructions. Say, a guest puts five thousand Euros in a safe. The maid knows the code. She opens the safe and takes one note out. Within 10 days she takes out up to 10 thousand. On the last day, she may steal up to a thousand at once. When the guest leaves he has no idea what happened with this thousand because he had been drinking for five days and had memory lapses.”