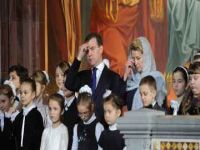 "Today, they continue to strengthen the moral foundations of our society and maintain the atmosphere of mutual respect, religious tolerance and concord," the statement went on.

President and Mrs. Medvedev attended the Christmas mass at the Christ the Saviour Cathedral in central Moscow. A night Christmas service ended at 2 o ’ clock in the morning. It was attended by more than 5,000 people.