The main Christmas tree in Russia’s Far East fell down on the square of the city of Vladivostok. The contractors, who installed the artificial tree on the city square have already arrived at the scene. 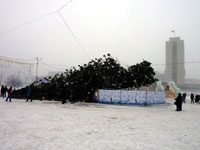 Marina Ivleva of the press service of the Vladivostok city administration told reporters that the city had purchased the 30-meter high fir tree from a Russian company. The tree fell down because of the strong wind, although the tree’s technical specifications excluded such an opportunity, RIA Novosti reports.

The tree, which was assembled in the capital of Russia’s Far East, weighs 15 tons. The tree cost the city 5.28 million rubles ($176,000). Almost the same amount of money was assigned from the budget of Vladivostok for decoration and assembly works. Therefore, the Christmas tree in Vladivostok is the most expensive Christmas tree in Russia evaluated at about $352,000.

Some other Russian cities also purchased very expensive Christmas trees, but all of them were much cheaper than the one in Vladivostok. The government of St. Petersburg purchased the tree for 2.7 million rubles ($90,000). The city administration of Grozny, the capital of the Chechen Republic, assigned 2.6 million rubles ($86,000) for the city’s main Christmas tree.

Even Russia’s most important Christmas tree – the so-called Kremlin Fir Tree – is cheaper. The naturally-grown tree was delivered to Moscow from the woods in the Moscow region. The delivery was free, but the city had to pay 2.6 million rubles to have the tree installed in the Kremlin.

Other Russian cities were more moderate in their choice of fir trees. Nizhni Novgorod and Tula spent 2.4 million rubles each. Probably the cheapest trees have been installed in Syzran and Orenburg. The administrations of those two cities purchased the trees last year for 1.2 million rubles, and decided to use the trees again this year because they still look good.