The Western Father Christmas started his life not as a Winter figure bringing gifts to children, but rather as the focus of a drunken fertility spirit who came to give good luck to the coming year’s harvest. The one who is now universally acclaimed as the benevolent and bearded Father Christmas is in fact an incarnation of Russia’s Grandfather Frost…to whom people gave presents as a ransom so that he would not turn their children to ice. Pravda also had a hand to play in this story… 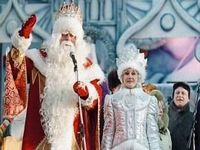 There are so many myths about Christmas and so many multi-cultural inputs that the figure has been clouded in a multinational mist. So much has been contributed by popular tradition, so much by cultural manifestations and so much more by the power-house of the Anglo-Saxonic marketing machine centred first on the UK and then on the USA, that the Yuletide figure Father Christmas, or Santa Claus, has become as associated with Coca Cola campaigns as he has with Charles Dickens’ novels. The truth, however, is that this “Father Christmas” is in fact a fertility spirit who belongs more to Easter while the real “Santa Claus” comes from the East. In fact, from Russia. He is none other than Ded Moroz, or Grandpa Frost.

Back in the time when universal access to writing began was when the first images of this figure started to spread. Roman times, when the Northern European festival of the Winter equinox (so scant was the daylight that the Scandinavians celebrated the festival of Yule, from the Norse hweol – wheel, representing the Sun) was celebrated alongside the Roman Saturnalia (the week before 21st December), a debauched, hedonistic festival wrought with drunkenness and fights and Juvenalia (25th December), a feast which honoured Rome’s youth. The Christians sought to find a way to “Christianise” the festival bringing all three pagan traditions together and in 221 AD, the historian Sextus Africanus expounded the theory that nine months after the Spring equinox of March 25th, Christ was born.

Who, then, is the white bearded benevolent and chubby Father Christmas? In Roman times, the winter season was far warmer than today and Midwinter would have corresponded to the planting season. This is why the early Father Christmases were green and covered in holly and mistletoe…so he was not a Winter figure, rather a fertility spirit belonging more to Easter.

The Father Christmas we all know and love started his life as a ferocious Winter spirit in Old Slavic lore, as Pozvizd (God of wind), Zimnik (God of winter) and Korochun (God of frosts) culminating eventually in the incarnation of Ded Moroz (Grandpa Frost). Far from bearing presents in his sack, he used it to carry children away and turn them into ice…and the families of the children used to ransom them by giving him a present so that he would leave them alone.

Over time, he mellowed and by the end of the nineteenth century, had become linked with the snow-girl, his grand-daughter (Snegurochka), due to the influence of Aleksandr Ostrovsky’s play with the same name and Rimsky-Korsakov’s libretto Snegurochka based on the play.

By this time he had assimilated many of the traits of Saint Nicholas, born around 280 AD in Patara, near Myra, Asia Minor, a religious man who became famous for his acts of piety and benevolence, travelling around distributing his inherited wealth, saving girls from prostitution by offering them a dowry so that they could marry and often dropping money anonymously down the chimney. Saint Nicholas was particularly remembered in the Netherlands as Sint Nikolaas and the early immigrants took him to America, where his name morphed into Santa Claus.

Yet Ded Moroz would also have had an association with the chimney, because in the freezing tundra of Siberia, people often used to excavate temporary houses under the snow and the entrance and exit would have been through the chimney. So how did Ded Moroz change into the red and white Father Christmas, or Santa Claus?

As he changed names in Imperial Russia from Ded Moroz to Moroz to Morozko to Ded Treskun, literature and music adopted him and turned him into a benevolent, bearded present-bearing avuncular chubby and jolly soul, celebrated more at New Year than at Christmas (the Orthodox Christmas is 6th January). Stalin issued a decree stating that persons representing Ded Moroz should be clad in blue…and it was the letter from Pavel Postyshev published in Pravda on 28th December 1935 which called for the reinstatement of the New Year’s Tree as the focal point of festivities…and Ded Moroz was thereafter always seated beside the Tree.

The tree itself used to be worshipped as a God by the polytheistic northern Europeans and early Christian missionaries used the triangular shape of the fir tree to teach the notion of the Father, the Son and the Holy Spirit.

The fusion of cultures and figures and traditions owes much to the marketing prowess of Great Britain and later the USA, as cultural manifestations were projected onto the world stage. The Christmas Card was launched in England as far back as 1830 by John Calcott Horsley, who produced small cards with messages and festive images while at the same time in the USA, R.H. Pease was making similar cards in New York. In 1809, Washington Irving had already made Saint Nicholas the Patron Saint of this city in The History of New York (founded by the Dutch).

Charles Dickens’ “A Christmas Carol” (1843) describes the Ghost of Christmas as a jolly bearded figure clad in a fur-lined green robe (fertility spirit), maybe following the poem by the American Clement Clarke “A Visit from Saint Nicholas” (1822) where Saint Nicholas is referred to as having “the beard on his chin…white as snow”. The marketing of this version of Father Christmas, the Pagan Green-clad Fertility Spirit transformed into the Russian Winter Spirit, continued with Thomas Nash’s montage in 1866 in Harper’s Illustrated Weekly (USA), placing Santa Claus as a toy maker, based on the Clement Clarke poem. Coca Cola launched an advertising campaign in the 1930s inspired on these drawings.

We wish you a Merry Christmas as you sing Noel, Noel…which comes from the French les bonnes nouvelles (the good news, the Gospel).