It has been 130 years since the birth of Joseph Stalin, one of the most contradictory political figures in Russia’s and probably world’s history. Many Russians split in their attitude to the “legendary leader of all nations.” However, most Russians do not need to have a Stalin-type politician at power nowadays. 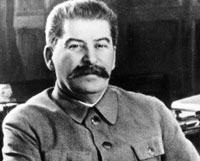 It goes without saying that such an anniversary could not pass unnoticed in Russia. Members of the Communist Party laid flowers to Stalin’s grave on Moscow’s Red Square in the morning. As a matter of fact, it is communists who usually have warm memories and share positive remarks about Joseph Stalin.

Liberals and human rights activists, on the contrary, demand the Russian society be “destalinized” immediately, claiming that Stalin and his legacy remain one of the biggest problems of modern-day Russia.

It is worthy of note that the majority of Russians do not share such a point of view. A recent research conducted by the Russian Opinion Poll Research Center said that 37 percent of the polled citizens of Russia were positive in their remarks about Stalin. About 26 percent expressed their respect to the late Soviet leader. Eight percent set out their sympathy and three percent – their admiration to Stalin.

Twenty-four percent of the polled expressed their negative attitude. Other people said that they could feel aversion, fear and disgust to Stalin.

As a rule, it is elderly people who share positive views about Stalin. Young people are either indifferent or negative.

Most of the polled highly appreciate Stalin as the leader of the nation. Thirty-five percent agreed that Stalin was guilty of exterminating millions of people. The same percentage of people said that he played the main role in achieving the Victory during the Great Patriotic War.

Fifteen percent said that only Stalin, a tough leader and a dictator, could rule the nation under the conditions of class struggle. Twenty-percent of the polled said that people did not know the whole truth about Stalin yet.

Nearly 58 percent of the polled said that they did not see a need in such a tough politician as Joseph Stalin for today’s Russia. The majority of United Russia party members – 62 percent – stick to this point of view along with young people (aged 18-24) and well-to-do respondents.