Moscow has become one of the most recognizable capitals in the world, GZT.ru website wrote with reference to a research conducted by hotels.com online booking service. 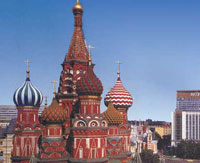 More than 10,000 people living in France, Spain, Germany, Japan, Canada, Great Britain, the USA and Australia took part in the online poll. The people were offered to name cities by their photographs on which iconic places of interest were not shown.

Paris became the most recognizable capital of the world. Even those living far away from France – Americans (67%), Japanese (76%) and Australians (74%) recognized Paris without the Eiffel Tower. The respondents recognized the city by its bridges across Sena.

More than five percent of the French said that Moscow’s Kremlin was their favorite sight. Ninety-four percent of them recognized Moscow without the historical symbol. A third of the Japanese, who participated in the poll, took Moscow for Berlin. Twenty-six percent of Australians agreed with them.

The German capital – Berlin – is one of the most unrecognizable cities. Only 61 percent of German residents recognized the city without the iconic Fernsehturm TV Tower.

Irish and Spanish respondents turned out to be most inattentive in the poll. Twenty-eight percent of Irish citizens took their capital – Dublin – for Amsterdam, and 27 percent of Spaniards took the capital of Spain for Lisbon.

The Eiffel Tower is one of the most popular places of interest in the world. Twenty-seven percent of Australians, 19 percent of Canadians, 18 percent of Dutchmen and 16 percent of Irish voted for the icon of Paris. Other respondents also voted for India’s Taj Mahal, San Francisco’s Golden Gate and the Sacred Family Cathedral in Barcelona.

Moscow attracts foreign tourists for its unique architecture and history. Some of them say that they experience both positive and negative emotions during their stay in the Russian capital.