Mass hysteria over flu among parents and increased interest of medical professionals to its causative agents sometimes leads to nonsensical results, Izvestia reports. 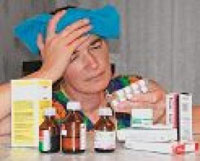 Emergency measures in Moscow were provoked by a double epidemics of common seasonal flu and swine flu, А /H1N1. School break was extended by a week, till November 15. It is not ruled out that it is not the only extension. According to Lyudmila Shevtsova, first deputy Mayor, this measure will be taken if the epidemics does not subside.

However, high school students are not willing to sit at home and head to movie theaters and cafes in large groups. In the middle of the day malls are filled with young visitors, and groups of teenagers can be spotted in the metro during normal school times.

The students will not be able to avoid school work entirely as teachers will provide them with homework over the phone and Internet. It is the first time such measures were taken in Moscow.

Theoretically, kindergartens and pre-schools are open, but the situation is stressful. Gennady Onishchenko , Russia's chief sanitary inspector, ordered the introduction of a “morning filter.” Each child’s temperature is taken, and their throats are checked prior to entering establishments. If three or more children are sick, the entire group must be shut down for quarantine.

These filters are in effect in many kindergartens and schools. However, parents say that in some establishments the check-ups are a pure formality: “There are journals in a changing room where we write down our kids’ temperature and sign in “Healthy.” The establishments whose administration turns a blind eye to the issue are filled with kids with running noses and cough. Some teachers are ready to “pay special attention” to a “suspicions” kid for a box of candy.

Other preschools strictly follow the rules. They place announcements that children with a temperature higher than 98.6 will not be admitted. Mothers are upset because some kids’ normal temperature is a little higher than that. The administration claims that it is better to not admit a healthy kid rather than admit a sick one.

For working parents the situation turns into a financial and organizational stress as they have to hire baby sitters, or ask grandparents or other relatives for help.

Presently, nearly every family has experienced a case of flu or acute respiratory viral infection. The majority of Muscovites admit that they did not see a doctor and used home remedies for treatment. Parents of sick children do not call for a doctor either and treat them themselves. First of all, it takes time to wait for a doctor. Second, the parents do not want their children to be placed into a hospital where they would be exposed to even greater infections. Third, doctors often complain that they are called over nothing but they still have to observe all formalities.

The situation with flue epidemics in Russia and provision of medications was discussed at a working meeting of the President Dmitry Medvedev and Tatyana Golikova, Minister of Health and Social Development. Both Medvedev and Golikova stated that taking advantage of sick people equals crime.