Putin Does Not Feel Nostalgic About Living Behind Berlin Wall

Prime Minister Vladimir Putin said in his recent interview with Russia’s NTV Channel that he was not nostalgic about the years that he had spent living in the German Democratic Republic. However, he added that he still had very warm memories of those years. Putin started working at the KGB after he graduated from the Leningrad State University. He lived and worked in Dresden for five years during 1985-1990. 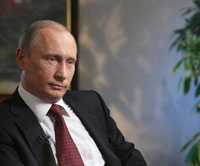 Putin Does Not Feel Nostalgic About Living Behind Berlin Wall

Putin said that nostalgia was an everyday feeling.

“Several years of my life passed there. They were not the worst years. I would even say that they were good years. We were friends with our colleagues, we were learning the world that was new for us, I was learning the language, interacting with people. Everyday communication gives a lot when it comes to the understanding of how people live, how they think, how one should build relations with them. It’s like another life, you know,” Putin said.

“It’s a door to a completely different world, it’s very interesting. We had plenty of contacts with our colleagues from both the State Security Ministry [of the USSR] and other spheres. We would often go to different excursions and spend Christmas in the mountains. I remember we were visiting an enterprise once at which they were making wooden figurines – smokers and pyramids,” Putin said.

“We were welcomed very kind-heartedly. I still remember that warmness and hospitality, and I am very grateful for it. There is some nostalgic feeling in this connection. But we can see the way how the Federative Republic develops, and we are happy that we are building warm relations on a completely different basis. This obviously pushes all kinds of nostalgia into the background,” Putin said.

The prime minister reminded that he was visiting Dresden last winter, where he was awarded The Order of Gratitude.

“To be honest, I do not try to understand these symbols much, because I have my own attitude to that, but here I made an exception because of the significance which I attach to the development of relations between Russia and Germany,” the chairman of the Russian government said.

“When I arrived, I could feel the hospitality that I saw at the end of the 1980s. Nothing has changed at this point, and I am very glad about it,” Putin stressed out.

Twenty years ago, when the Berlin Wall collapsed, Putin had to communicate with the demonstrators, who surrounded the KBG villa in Dresden.

“Indeed, the people came to our building one night, but there was no conflict. We, including myself, explained to them that the building belonged to the Soviet Army, that we had a right to be there in accordance with special agreements, that we were working there. The people left some time later, but in general, it was a very stormy and turbulent time,” he said.

“I mentioned my impressions of the end of the 1980s, when I arrived in the GDR. Why was there such a situation? The socialist system generated losses in the economy first and foremost, whereas the planned economy was showing its noncompetitiveness. The people living in the GDR could see that the living standard in the FRG was higher, that people living there were more liberated - they could travel in the world freely and take direct participation in the political life of their country. Unfortunately, there was nothing like that in the socialist system – it was non-competitive,” Putin said.

The Russian premier made his last visit to Germany at the end of 2008, when he was awarded the above-mentioned order.