Kalashnikov AK-47 Becomes Weapon of the Past

Russia’s Izhmash Concern, the maker of the renowned Kalashnikov assault rifle, will unveil a new gun next year. The gun is said to replace the legendary AK-47 system designed by Mikhail Kalashnikov. 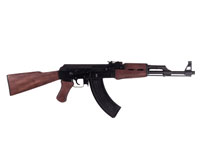 Kalashnikov AK-47 Becomes Weapon of the Past

Vladimir Grodetsky, the general director of the enterprise, said at the round-table discussion devoted to the 90th anniversary of the legendary engineer that the specification of the new gun would make it 40 or 50 percent more efficient than its predecessor.

The Kalashnikov gun has become a legend that generated a whole class of small arms. There are more than 100 types of Kalashnikov guns: AK-74M, AKS-74U (the shorter version), AK-101, a number of smaller versions – AK-102, AK-104, AK-105, as well as lightweight machine guns Kalashnikov LMG, PKT tank machine guns and other kinds of small weapons. All of them are based on the same automatics principle, which makes it a lot easier to teach soldiers to shoot and repair the gun.

Each and every Kalashnikov can be equipped with: optical, night, laser and collimator sights, rifle-attached grenade launchers, various types of cartridges and grenades. The modern-day AK-47 gun and all of its modifications is not just an assault rifle, but a whole small-arms system, which has earned the reputation of the most efficient and reliable weapon in the world.

However, the legendary AK-47 becomes history. This is a weapon of the wars of the past, a weapon for large and poorly trained armies. This is probably the reason why Russia’s Defense Ministry purchases small arms from other countries.

Russia has other assault rifles, beside Kalashnikov: AN-94 Abakan and AEK-971 guns, but they lag far behind the renowned “Kalash.”

Vladimir Grodetsky, the director of the Kalashnikov maker, said that the enterprise was working on a new AK line which would be unveiled next year.