Vyacheslav Ivankov, better known as a Russian god father Yaponchik (Little Japanese) died October 9 in Moscow at age 69. He died in a hospital where he was treated after an assassination attempt in July. Ivankov was a legendary person in the circles of special services and the criminal world of Russia. He earned the reputation of one of the most influential leaders of the criminal world in Soviet times and kept the title till his last days. Among his many connections were actors, politicians and businessmen. He was well known outside Russia and was considered to be one of the leaders of the entire Russian mafia by the special services of many countries, including the USA. 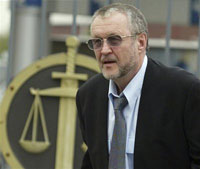 Mr. Ivankov always avoided publicity, and lately (prior to the assassination attempt) no one heard anything of him. However, his death could not be left unnoticed by criminal experts, politicians, and even members of the State Duma.

On July 28, 2009, Ivankov was shot while leaving a restaurant on Khoroshevskoye Road in Moscow. He was shot in the stomach. A sniper was shooting from a mini-van parked across the road from the restaurant, and escaped in a different car.

The assassination attempt remains unsolved. The investigators working on the case stated right away that the main theory was the victim’s “professional activity.” They believe that until recently Yaponchik acted as a mediator during conflicts of criminal groups and came to Moscow before the assassination to resolve one of these conflicts.

After the assassination, Ivankov was brought to Botkin Hospital in Moscow. He underwent several surgeries but remained unconscious. Later, Ivankov’s relatives transferred him to a private hospital licensed for stem cells treatment.

In the beginning of October Ivankov felt better and regained his consciousness. However, late last week he felt worse and passed away on the night of October 9th.

According to the Ministry of Internal Affairs, Ivankov was born on January 2nd, 1940. He was involved in theft since he was 14 years old. In 1965, he was arrested for the first time for pickpocketing. During his arrest, Ivankov physically resisted the police, and was sent for a psychiatric evaluation. He was diagnosed with schizophrenia and sent for a compulsory treatment, but later escaped the clinic. In the years to follow, this diagnosis helped him to avoid punishment for small crimes. His diagnosis was overturned in 1974. Thanks to his achievements in boxing, Ivankov was accepted in the gang of Mongol (Gennady Korkov) specializing in burglaries and extortion racket. That’s where he was nicknamed Yaponchik for the shape of his eyes. In 1972, the gang was eliminated by the Moscow Criminal Intelligence, but Yaponchik managed to avoid the punishment again due to his diagnosis. In 1974 Yaponchik was arrested for a fight with Georgian god fathers and was imprisoned for a short period of time. According to the Ministry of Internal Affairs, during that imprisonment Yaponchik was crowned as a god father.

Later Ivankov organized his own gang specializing in burglaries and racket. He was famous for his ability to escape responsibility. For example, in 1976, Yaponchic managed to evade the authorities when he was sought for extortion. Six months later he came to the police with a prepared alibi. According to some sources, he was diagnosed with paranoid schizophrenia again and sentenced to five years in a prison psychiatric ward. After his release he returned to Moscow.

In 1981, Ivankov was arrested again on robbery, keeping of weapons and forgery charges, and sentenced to 14 years in prison. While in prison, Ivankov violated the regulation 58 times and was sent to a punitive isolation ward 35 times. In the end of the 1980s, many influential and famous people started a campaign for his liberation. In February 1991, by the decision of the Russian Supreme Court, Ivankov’s punishment was mitigated and he was soon released.

In 1992 Ivankov left Russia. He moved to New York where he became a mediator in the conflicts of criminal leaders and Russian businessmen. American special services believed that he also supervised many areas of criminal business, including those in Russia. American media openly called Ivankov the “head of Russian mafia,” however there were no evidence to it.

In 1995, Ivankov was arrested by the FBI, charged with the extortion of 3.5 million dollars from an investment advisory firm, Summit International, run by two Russian businessmen. At the end of 1997, he was found guilty and sentenced to nine years and seven months of imprisonment for extortion and fictitious marriage. In July 2004, Ivankov was released from an American prison and immediately deported to Russia. In Moscow he was arrested for the murders of Turkish businessmen, but in 2005 he was found innocent and released.

After the process Ivankov stated that he was going to retire from business. His lawyers informed that while in prison, Ivankov wrote a cycle of poems, children’s fairy tales and his autobiography with a working title “Against the Wind.” However, the investigators believe that he continued to serve as a mediator in criminal conflicts.

Ivankov was buried at the Vagankovskoe Cemetery in Moscow, next to his mother's grave. Hundreds of mourners, many in black leather jackets and sunglasses, filed into a Moscow cemetery with elaborate wreaths on Tuesday to attend the funeral of the mafia kingpin, AFP said. Security was tight at the leafy Vagankovskoye Cemetery - the resting place of numerous Russian poets, artists and singers -- as Ivankov was buried next to his mother. Journalists were not allowed inside the gates.

The cemetery was checked by sappers before the funeral and 20 police officers carried out crowd control, RIA Novosti news agency reported.