The powers that be are also human and like to go on vacation. The private life of Soviet leaders is enigmatic and only years later we get to see things behind the curtain. Where in the USSR did General Secretaries of the Communist Party like to spend their holidays? 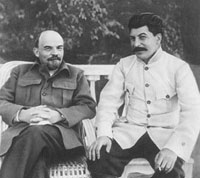 There is a monument known as “Lenin on Vacation” in a park of the city of Simferopol, Ukraine, across the road from the train station. The monument, rumor has it, is a fragment of the sculpture composition “Lenin and Stalin on Vacation,” erected in the 1940s.

However, Lenin himself has never been to Simferopol. A modest homestead Gorki, where excursions are held these days, was his only country residence. Right after Lenin’s death in 1924, Stalin evicted Lenin’s widow Nadezhda Krupskaya from the residence since she had the imprudence to abandon her right to the inheritance.

Joseph Stalin, on the contrary, had several residences near Moscow. He put the relatives of his both wives, Ekaterina Svanidze and Nadezhda Allilueva, in his country houses in Zubalovo.

Stalin himself resided in the near country house in Kuntsevo, in the remote house in Lipki, or in his homestead located at the 200th km of Dmitrivskoye Highway.

It was Stalin who set the trend among the Russian elite to vacation in the south of the country. He had several residences in the Caucuses – Zelyonaya Roscha (Green Wood) near Sochi, Kholodnaya Reka (Cold River) near Gagry, or Mussara near Pitsunda.

In the Crimea he took a liking to Livadia and Massandra palaces, the former summer residences of Russian Emperors Alexander III and Nicolas II. Although, Stalin rarely visited his residences.

For example, a hunting lodge in Massandra built on Stalin’s order from Siberian larch without a single nail, seemed too big to the owner. The General Secretary came there only once and never crossed the door of that“hut” again.

When Stalin took office, he ordered to build elite residences and resorts on the Black Sea coast.

We all know that on vacation in the Crimea in 1964, Nikita Khrushchev almost fell victim to a government conspiracy which led to his removal from the office. Mikhail Gorbachev nearly repeated Khrushchev’s fate while vacationing in Foros when the communist coup occurred in 1991.

Like Khrushchev, Leonid Brezhnev liked fishing and hunting, and often visited a hunting reserve in the Crimea near the town of Alushta. A Fisherman’s House where the people’s servants liked to fish trout was built on the Chernaya River (Black River).

They also used to spend time in the “Wind Gazebo” in the mountains, about 1.5 kilometers above the sea level, where they could enjoy crisp mountain air and gorgeous landscapes. However, a hunting reserve in Zavidovo (not far from Moscow), and not the Crimea was Brezhnev’s favorite vacation spot. He used to escape to Zavidovo right after his Kremlin meetings.

They say Brezhnev was an excellent driver and used to cover 150 km distance between the Kremlin and Zavidovo within 50 minutes! Although in the 1980s, while driving at a high speed, the General Secretary got into an accident and totally crashed his favorite Rolls Royce.

One of the most famous vacation spots for the Soviet and Russian leaders since Brezhnev times has been the Volzhsky Utes (Volga Cliff) resort in the Samara region. Now it belongs to the Presidential Property Management Department.

Boris Yeltsin, who loved fishing on the Volga, visited it on many occasions. Today, ordinary mortals can also afford to stay at this elite resort, except for the months of July and August, when it is visited by governmental officials.

After the collapse of the USSR, Russia has lost the majority of its Crimea lands to Ukraine. The only former southern residence that still belongs to the officials is Bocharov Ruchey (Bocharov Stream) near Sochi built in 1955. In the late 1970s, Brezhnev came there to treat his bad joints, and later Yeltsin visited the resort as well.

These days both current and former leaders can enjoy the resorts of the Presidential Property Management Department’s Medical Center in the Caucasian mineral waters – Zarya (Dawn) and Krasnye Kamni (Red Rocks) in Kislovodsk, Moskva (Moscow) in Essentuki, Dubovaya Roscha (Oak Wood) in Zheleznovodsk. Gorbachev and Yeltsin used to come there for vacations and treatments with their spouses.

By the way, the first Russian president spent much time vacationing, although he always remembered about work. For example, in 1997 Yeltsin spent over 250 calendar days in his country residences working on documents.

He met the most significant life events – various political twists, his second term election, the birth of his grand children and grand-grandchildren, his heart attacks, and his surgery – at the residence in Barvikha near Moscow. Apparently a vacation is not a hindrance to the government activity.