Sergey Vladimirovich Mikhalkov (1913 – 2009), author of the National Anthems of the Soviet Union and of the Russian Federation, died today in a Moscow hospital aged 96. His lyrics inspired generations of Soviet and Russian citizens in achieving their goals. Set to the music written by Aleksandr Aleksandrov (1883 – 1946), Mikhalkov’s lyrics were introduced in 1944 so as to inspire the Soviet soldiers in their final push for victory against Fascism and oppression, freeing Europe and Africa from tyranny. 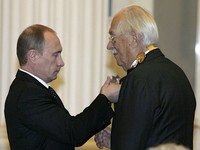 Mikhalkov in fact wrote three anthems: the Soviet national anthem which was adopted in 1944 and was sung until 1953 when Stalin died. Due to the destalinization process, the lyrics were suspended until 1977, when Mikhalkov revised them. The anthem was discontinued between 1991 and 2000 and in this year, it was re-adopted with Mikhalkov writing the lyrics of what is now the National Anthem of Russia. The original lyrics were written in collaboration with the Armenian Soviet poet Gabriel Arkadyevich Ureklyan (known as G. El-Registan) (1899 – 1945). Mikhalkov was commissioned by Stalin to write the lyrics of a new anthem to replace the Internationale and to instil pride and courage in Soviet citizens in their tremendous effort to fight off the invader. It was approved by Stalin in 1943 and adopted on January 1, 1944.

Better known for his National Anthems, Mikhalkov was also a prolific author of children’s books, fables and satires. Among his most famous works was the poem about the amazingly tall Dyadya Styopa (Uncle Styopa). Indeed, it was Mikhalkov who revived the genre of satirical fable and he used this genre in a number of plays and scripts for film comedies in the Soviet era. His works also included prose and adaptations of foreign works, such as Mark Twain’s The Prince and the Pauper. Mikhalkov rose to be Chairman of the Soviet Writer’s Union and criticised Pasternak and Solzhenitsyn for their anti-Soviet positions.

He was awarded Stalin Prizes in 1941, 1942 and 1950, the Hero of Socialist Labour Prize, the Order of Lenin and the Order for Service to the Fatherland (Second Class), the last one on his ninetieth birthday, awarded personally by President Vladimir Putin.

Sergey Mikhalkov leaves his wife, the physicist Yulia Subbotina, two sons, film directors Nikita (Academy Award for Burnt by the Sun - 1994) and Andrey Konchalovsky, who received a nomination for an Oscar with Runaway Train and seven grandchildren.

Russia — our sacred state,
Russia — our beloved country.
A mighty will, a great glory —
Your possession for all future ages!

Glory to you, our free Fatherland,

Ancestor-given wisdom of the people!

Glory to you, our country! We are proud of you!

From the southern seas to the polar regions
Spread our forests and fields.
You are unique in the world! You alone are like this —
Our dear land kept safe by God!

Wide amplitude for dreams and for living
Gets opened up for us with each passing year.
Loyalty to the Fatherland gives us strength.
Thus it was, is, and always shall be!