Putin Gives His Watch and Hunting Knife to Shepherd's Family

Russian Prime Minister Vladimir Putin made a one-day stop in the Tuva Republic visiting from the city of Irkutsk, where he boarded the Mir-1 deep water submersible to explore the bottom of Lake Baikal. 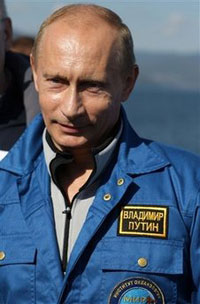 Putin Gives His Watch and Hunting Knife to Shepherd's Family

Russian news agencies said Putin had dived to a depth of around 1,400 metres (4,600 feet) - the deepest point in the lake's southern part -- and safely returned to the surface after four hours underwater, AFP reports.

"I've never experienced anything like it in my life. It's a special feeling. What I saw impressed me because with my own eyes I could see how Baikal is, in all its grandeur, in all its greatness," he said.

Putin spent the Sunday evening and Monday in a tent camp near the Khemchik River. Putin enjoyed the whitewater rafting on the river and made a short stop in a desolate location amid mountains. He saw a flock of sheep and a shepherd nearby. The prime minister invited him for a cup of tea, and the shepherd asked Putin to visit his home.

The shepherd was very hospitable: he introduced the prime minister to his son and two daughters. Putin removed his watch and gave it to the man’s son as a gift. The shepherd received from Putin his own hunting knife, RIA Novosti reports.

It is not the first time when Putin visits Tuva. He visited the republic in August 2007 in the company with Albert II, Prince of Monaco, and Russian scientists.

During the current visit to the republic Putin had a meeting with Andrey Subbotin, a senior scientist of the Institute for Ecology and Evolution Problems. The scientist is in charge of Putin’s program, which the prime minister initiated in 2007 to save the snow leopard.

On Tuesday Putin left to the city of Orenburg to discuss the problems in Russian regions, where drought destroyed a lot of harvest.