The number of Russian children adopted by US parents has reduced considerably during the recent years, Interfax news agency reports with reference to Michele Bond, deputy assistant secretary in the Bureau of Consular Affairs at the U.S. State Department. 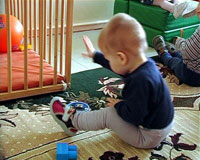 Nowadays, US parents adopt 1,800 children from Russia a year. However, the number of Russian children, who found new homes in the United States, was a lot larger during the 1990s – with up to 5,000 adoptions a year.

The number of adoptions reduced after the Russian government introduced new licensing rules for US adoption agencies, Michele Bond said.

The official added that 16 Russian children, adopted by US parents, died in the United States.

Russian consular services have a full access to the information about the lives of Russian adoptees in the United States, the official said. Michele Bond also pointed out the fact that more Russian parents started showing interest in adopting Russian orphans inside Russia.

As for American adoptions, Michele Bond said that US parents adopt children from many other countries of the world – Ukraine, China and Ethiopia, for example. The reason, which makes US foster parents look for a child in Russia is the fact that the number of orphans in the country is rather large.

The number of adoptions in the United States peaked in 1970. It is uncertain what caused the subsequent decline. Besides the legalization of artificial birth control methods and abortion, the years of the late 1960s and early 1970s saw a dramatic change in society’s view of illegitimacy. In response, family preservation efforts grew so that few children born out of wedlock today are adopted. Ironically, adoption is far more visible and discussed in society today, yet it is less common.

Although adoption is today practiced globally, the United States remains the leader in its use. The table below provides a snapshot of Western adoption rates. Adoption in the United States still occurs at nearly three times those of its peers although the number of children awaiting adoption has held steady in recent years, hovering between 133,000 to 129,000 during the period 2002 to 2006.

The state of Georgia in the United States of America is the first jurisdiction to include human embryos in it adoption laws. Conservative evangelicals are the primary supporters, considering it a recognition of embryo life and a mechanism to save that life. These developments in adoption law are not without critics, however, even among religious communities. While the Catholic Church has not announced its support or opposition to the adoption of embryos, its theologians are divided on the issue with some deeming it a "grave violation of nature," and others viewing it as an act of charity.

In the absence of adoption laws, embryo relinquishment has occurred under property laws, being transferred from one set of individuals to another. As of 2003, 400,000 embryos had been frozen in the United States alone and an estimated 2% or 9,000 were available for donation; the rest were reserved for future use by the parents or for medical research.