When German troops neared Moscow in November 1941, there was a real threat for the capital of the Soviet Union to capitulate. Stalin found out shortly before that that Adolf Hitler was conducting all important meetings in underground bunkers. Stalin decided to build reliable shelters for himself. 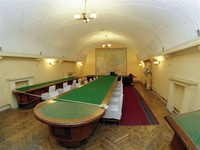 In accordance with the secret decree of the State Committee for Defense signed on November 22, 1941, underground bunkers were built in Kuibyshev, Stalingrad, Saratov, Yaroslavl, Gorky, Ulyanovsk and Kazan. Lavrenty Beria, the chairman of the Committee, was personally in charge of the task.

Stalin ordered to build a large underground bomb shelter underneath the Kremlin prior to the war. Engineers would come across many steel doors when they were building the Kremlin’s Marble Hall in 1982: the doors were not indicated anywhere in the project documentation of the Kremlin.

The first bunker that was built during the years of the Great Patriotic War appeared 20 kilometers far from the city of Yaroslavl. The bunker was exploded during the 1960s.

The shelter, which was built in Kuibyshev (the city is currently called Samara), still exists. The bunker could easily survive the direct hit of a large two-ton air bomb. The life support system of the shelter was operating autonomously. It had an electric power plant and air regeneration systems, similar to those on submarines.

Another shelter was built in the city of Stalingrad (renamed as Volgograd in 1961). The entrance to the bunker was hidden in a large ravine. Yevgenia Zharova, an employee of the Regional Center for Protection of Monuments, visited the shelter in 1949, when she was a little girl.

“It was a huge lodgment under the ground. The hall was about ten meters high. There was a tank and a Po-2 aircraft in the hall. The plane was supposed to be used in case of emergency,” Zharova said.

When Nazi troops were shelling Moscow in October 1941, Stalin sent the government, the Presidium of the Supreme Council and foreign ambassadors to Kuibyshev, but he did not leave Moscow.