Russia marks the Day of Memory and Grief on June 22. The Great Patriotic War of the Soviet nation against German fascists began 68 years ago. Thousands of people light candles today in honor of those who fell in the war. 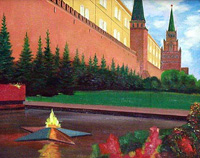 Fascist Germany attacked the Soviet Union on June 22, 1941. The Nazi aviation bombed airbases, railways, naval bases and many other objects at a distance of up to 300 kilometers from the state border. Italy, Hungary, Finland and Romania stood up against the Soviet Union too.

The Soviet Union suffered the largest human losses in WWII. A senior spokesman for Russia’s Defense Ministry, Alexander Kirillin, said that the nation lost approximately 26.600,000 people, including 8.600,000 military men, including 6.5 million of those who were killed in battles. The Great Patriotic War lasted for 1,418 days and nights.

Thousands of people in Moscow and other cities of Russia got up on June 22 at 4 a.m. (the time, when Nazi Germany attacked the USSR) to light candles in memory of those who were killed in the most terrible war of Russia’s history, Interfax reports.

Over 10,000 people gathered on Moscow Sparrow Hills (Vorobyovy Gory) to open the Alley of Memory there. The members of the action hung 10,000 bells on the trees and put 10,000 candles on the ground.

“The number of bells will grow every year. The Alley of Memory will be the new tradition, the tradition to remember. It is very important not to forget the deeds of the people who defeated Nazism,” the organizer of the action, Nikita Borovikov (the leader of Nashi Movement) said.

A senior official of the Institute for Russian History, Valentina Zhiromskaya, said that it was impossible to determine a more or less precise number of the victims of the Great Patriotic War. The number of human losses will exceed 50 million if specialists count those who died after the war ended, as a result of the so-called echo of the war.