Russia’s External Intelligence Service declassified the archives about one of the most prominent Soviet intelligence officers in Nazi Germany – Willy Leman, a top secret Soviet agent nicknamed as Breitenbach. He was USSR’s only agent at Germany’s Gestapo. Leman warned Moscow of Germany’s intention to attack the Soviet Union, RIA Novosti news agency reports. 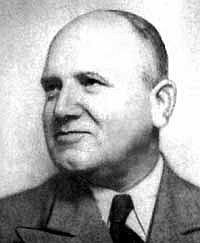 The documents, which Leman provided to Soviet secret agents since 1941, said that Nazi Germany was preparing to attack the Soviet Union.

“On June 19, 1941, Breitenbach reported the date and the time of the beginning of the war,” a senior official with the Russian External Intelligence service, Sergey Ivanov said.

Willy Leman was born in 1884 in Leipzig. He became a woodworker at age 17, but later joined the navy. In 1911, Leman began working at the Berlin Police and was later transferred to the counter-intelligence department. He proved to be a very good counter-intelligence officer during WWI.

Leman began to cooperate with the external intelligence of the Soviet Union in 1929. He was an ardent anti-fascist and decided to help the USSR acting up to his convictions. There is a theory, though, that Leman was working for the USSR for money. He was collecting information about Germany’s political police (Gestapo), military intelligence and counter-intelligence.

When he took an official position at Germany’s defense industry, Leman began to provide top secret materials about the nation’s industry to Moscow. When a high-ranking SS officer, Leman attended military drills and military objects. He provided detailed descriptions of new types of German artillery weapons, armored vehicles, grenade launchers and so on.

Willy Leman was exposed in December 1942: he was executed by shooting at Gestapo. The date of his death remains unknown. His wife was told that Leman had died in a railroad accident.

Russia’s External Intelligence Service intends to use the declassified materials about Willy Leman’s fate in the struggle against the falsification of history. The struggle will be conducted within the scope of the campaign, which President Dmitry Medvedev started.

Many Russians are certain that the government must struggle against incorrect formulations of history both in domestic and foreign sources, a recent opinion poll showed. Many of the polled (34 percent) said that Medvedev’s committee needs first to work with the history of the Great Patriotic War. Six percent of the polled said that the Great October Revolution would be in need of protection as well. Three percent stand for the protection of the history of the Civil War, as well as the conflicts in Chechnya and South Ossetia. Others mentioned the Soviet period of Russia’s history on the whole, the Holodomor in Ukraine, the repressions of the 1930s, Gorbachev’s perestroika and the personas of Soviet leaders.

Many Russians still think that they are flawed, inferior and vulnerable – not like they were during the Soviet era. That is why the Russians can be very emotional when someone tries to hurt their national pride and independence.