Forty percent of Russians, who had to use the Emergency Medical Service over heart or blood pressure problems, died of infarction and strokes during the first 15 minutes after they dialed the number of the service, i.e. before ER doctors arrived. Up to 60 percent of such patients die on the way to hospitals. 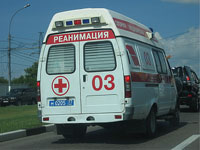 British ER services follow special rules to prevent such lethal outcomes. An emergency team has only eight minutes to reach a person in critical condition. The time limit is extended to 15 minutes to less critical incidents.

First day death demonstrates the quality of the work of ambulance crews. The emergent medical aid can be inefficient due to the absence of universal standards for the provision of pre-hospital emergency aid, the shortage of qualified personnel, the use of outdated medications and the lack of funding, topnews.ru reports.

The supply of medicines to ER stations in Russia needs to be revised too. Many medications, which the service traditionally uses, became outdated long ago. The situation is traditionally fine in Moscow and St. Petersburg. Other cities and towns of the Russian Federation (with a few exceptions) experience serious difficulties at this point.