Plesetsk Cosmodrome is a Russian spaceport, located in the Arkhangelsk region, about 800 km north of Moscow and south of Arkhangelsk. During the Cold War period it was a super secret military facility. Now Plesetsk starts working for peaceful purposes sending peaceful satellites to the orbit. 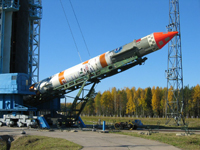 Plesetsk was originally developed by the Soviet Union as a launch site for intercontinental ballistic missiles. Construction started in 1957 and it was declared operational for R-7 rockets in December 1959. The urban-type settlement of Plesetsk in the Arkhangelsk region had a railway station, essential for the transport of missile components. A new town for the support of the facility was named Mirny, Russian for "peaceful". By 1997, more than 1,500 launches to space had been made from the site, more than for any other launch facility, although the usage has declined significantly since the breakup of the Soviet Union.

This month Plesetsk Cosmodrome will be used to launch of ESA's Gravity field and steady-state Ocean Circulation Explorer.

GOCE is ESA's first Earth Explorer mission and will map global variations in the gravity field with extreme detail and accuracy and will be placed into a low altitude orbit by a Russian Rokot vehicle from the Plesetsk Cosmodrome. This will result in a unique model of the geoid, which is the surface of equal gravitational potential defined by the gravity field, satnews.com reports.

This model of the gravity field is crucial for deriving accurate measurements of ocean circulation and sea-level change, both of which are affected by climate change. GOCE-derived data are also much needed to understand more about processes occurring inside Earth and for use in practical applications such as surveying and levelling.